Powering a cleaner future for the next generation 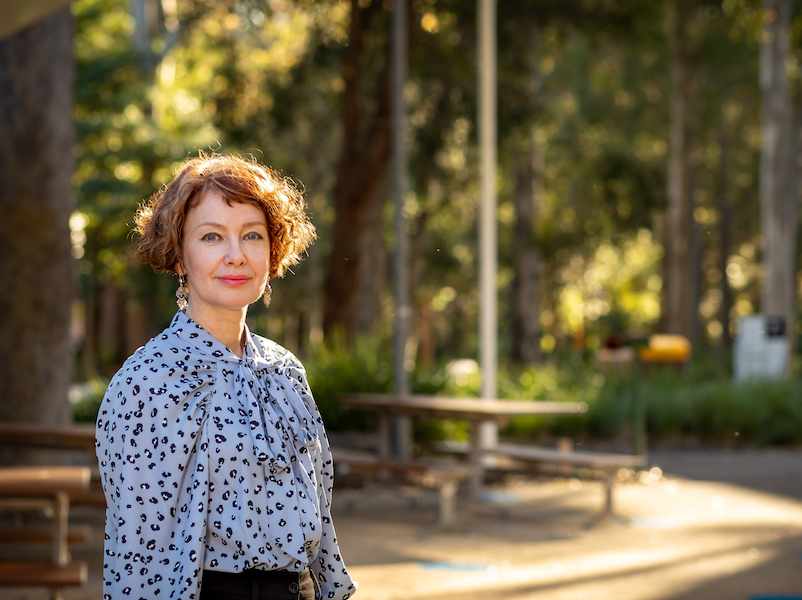 Associate Professor Galina Mirzaeva describes herself as both naturally optimistic and highly practical. They’re traits that keep her motivated to persevere in tackling one of the biggest global problems of our era: climate change.

Galina’s research is focused on advancing switched power electronic converters, which provide high efficiency conversion from one electric power to another. Improve this process, she says, and we pave the way to more environmentally friendly energy solutions.

“I put my effort into developing technologies that save energy, utilise resources that naturally replenish, and cut emissions into the atmosphere,” says Galina.

“The intellectual challenge, emphasis on practical implementations, and the support from cutting-edge manufacturing and computer technologies make my field of research particularly exciting.”

“Smart switching of these converters is governed by real-time control systems. Such a system measures electrical signals, determines the present and the future state of the converter, and works out commands for the switching devices. All this needs to be done within a fraction of a millisecond.”

One of Galina’s key research goals is to develop control systems that make the most of this very short time period and bring the converter performance as close as possible to optimal.

“What is optimal in each case depends on application, but the methodology and general framework for designing optimal control can be applied to existing or future power converters, resulting in their improved performance..”

Galina’s research findings are providing an alternative to old power conversion technologies, which are bulky, dissipate a lot of energy as heat, and are generally non-environmentally friendly.

“Where other forms of energy have been traditionally used—for example, coal-fired power stations and various vehicles that run on fossil fuel—converters can offer clean, environment-friendly and low-loss power alternatives such as wind and solar energy farms, electric cars, boats and aircrafts.

“They are also driving new innovations such as electric motors, which are used for automated machine tools, electric vehicles and electric aircrafts.”

Galina’s research expertise has put her in high demand within the mining, power and transport manufacturing industries. It’s a role she relishes and takes seriously, believing that it’s imperative for her research to remain relevant to the needs of technology end-users.

One of Galina’s recent projects, supported by the Australian Coal Industry’s Research Program (ACARP), helped to improve electric safety in underground mining. The project, which was a collaboration with ResTech, had unexpected and welcomed outcomes.

“The technology that we developed can be embedded in the electric drives installed on underground vehicles. In the process of solving the mining safety problem, we also advanced the research in matrix converters, converters with redundant switches, model predictive control and optimal switching design.

“Several world-class research publications came out of this project, and the technology has found its way to the leading electric drive manufacturers.”

Another of Galina’s projects aims to reduce flight times from Australia to the rest of the world. The project is a partnership between More Electric Aircraft, Rolls-Royce@NTU Corporate Laboratory at Nanyang Technological University in Singapore, and Aerospace Technology Institute at Nottingham University in the UK.

With support from the Australian Department of Industry, Innovation and Science, her team is looking at ways to improve energy consumption and eliminate the need for fuel replenishment stop-overs. This would be good news for transport companies and Australians alike—and it’s not far from becoming a reality.

“We are only a couple of years away from a direct flight from Sydney to London.”

From the air to the sea, Galina has also partnered with local boat manufacturing company Stebercraft in Taree, and Ampcontrol in Newcastle, to develop an Australian-made fully integrated hybrid electric system.

“To have a fully integrated hybrid electric system, companies currently have to pay big money to a European or an American company. My research team is going to change this.

“Even COVID-19 hasn’t stopped our work. The technology has been developed with social distancing requirements strictly followed and surgical masks while working. We’re planning to launch the first Australian-made integrated hybrid electric boat into the Manning River.”

Towards a cleaner future

Galina is proud to be driving progress for companies, Australians and our planet. The fruit of her labour can be seen everywhere from transport, to mining, and even household energy prices.

“A few years ago, hardly anyone except specialists knew anything about inverters.

“Now, almost 2.5 million households have rooftop solar installations and use inverters to convert electricity from solar to standard AC power. The cost of solar energy is getting cheaper every day, and millions of Australians benefit from that.”

But perhaps Galina’s biggest achievement is what she is leaving behind for future generations. Not only through cleaner energy sources and processes, but in the classroom, and through the transfer of valuable knowledge that makes new solutions possible worldwide.

“It’s an honour to pass on my passion to younger engineers. Graduate and post-graduate students who I taught or mentored are now working around the globe on various exciting power electronics projects, including astronautics, smart grids, power systems, transportation and more.”