Redefining the future of wireless communications

BY 2019, 51% OF THE WORLD'S POPULATION WILL BE CONNECTED ONLINE WITH THE GLOBAL NUMBER OF INTERNET USERS EXPECTED TO EXCEED 3.9 BILLION1. 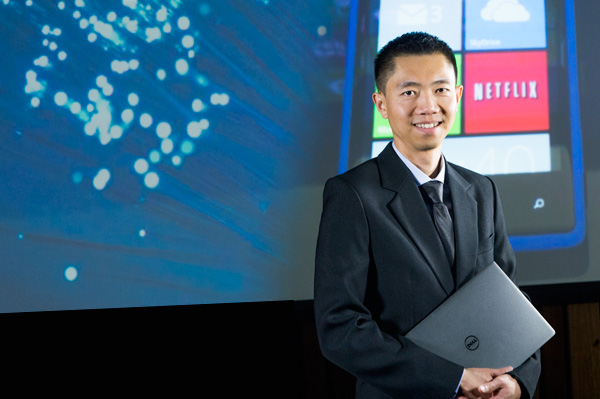 Ong arrived in Australia following studies at the University of Cambridge (UK) and the National University of Singapore. He has since received two Australian Research Council (ARC) awards for his contribution to information theory, namely an ARC Discovery Early Career Researcher Award and an ARC Future Fellowship.

Information theory, Ong explains, is the exploration of the very finite limits of data transmission.

"I like information theory because it's a very elegant use of mathematics to solve communication problems. What we look at is not individual technologies, which may be obsolete tomorrow, but the limits to communication systems and how to improve them fundamentally. For example, instead of tweaking various schemes for transmitting data among devices, we get rid of the assumption that we have only one antenna  for each device", says Ong.

Developing new protocols for the transmission of data, utilising device storage, that provide a 10-100 fold increase in speed could place Ong at the forefront of wireless communication systems. Implications for the telecommunications and technology industries are vast.  Ong looks towards streaming networks such as Netflix as a prime example. Netflix recently reached 1 million Australian users and 62 million users world-wide.

"At the 7pm timeslot there are a lot of people interested in downloading shows to watch, so this high peak time has a lot of traffic and requires a lot of bandwidth. One way to deal with this is to estimate what the viewer wants to watch and pre-fetch the data to the device first. For example when you are sleeping at night the program will try to anticipate what you want to watch at 7pm the next night and pre-download it to the computer's storage."

Ong's research is part of a $355,000 ARC Discovery Grant awarded in 2014 in conjunction with Associate Professor Sarah Johnson. The project is currently being delivered through UON's Faculty of Engineering (Electrical), which ranks among the top 200 subjects in the world according to the QS World University Rankings by subject.