A series of serendipitous events has led to many successful research collaborations for Emeritus Laureate Professor Graham Goodwin. 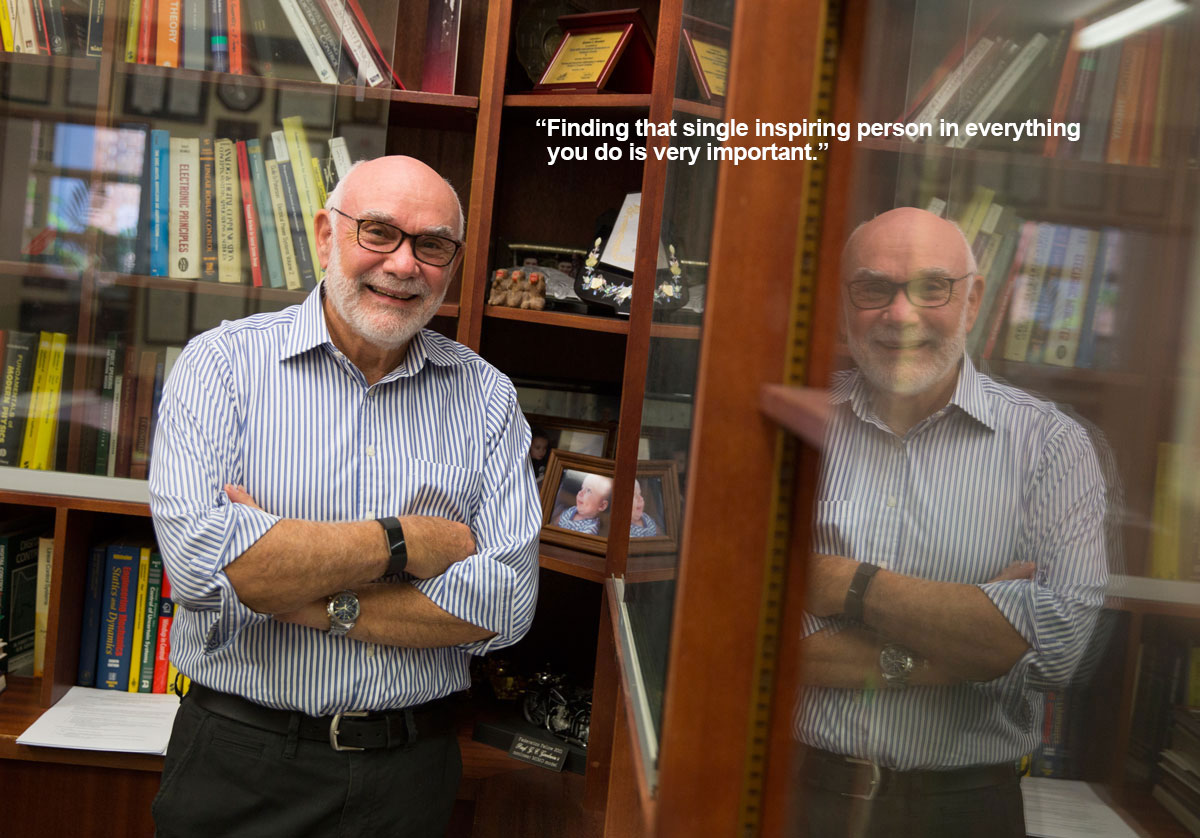 Born in Broken Hill, a mining town in western NSW, Graham always held an ambition to be educated. Undergraduate degrees in Physics and Engineering at UNSW were only the start of his education – with the Laureate Professor learning from collaborations across the research spectrum.

During his PhD in Electrical Engineering, Graham was inspired by a supervisor who was intrigued by the interconnection between mathematical optimisation theory and industrial relevance – and that sparked a lifetime curiosity for Graham that’s led to many successful outcomes.

“I completed my PhD in 1970 and went to work at London’s Imperial College for the next few years,” Graham says. During his time as a lecturer at Imperial, Graham forged successful relationships that he’s drawn on over the years. However, a return to Australia beckoned. Graham was compelled to return to Australia to work with another inspiring researcher: Professor Brian Anderson. The founding Professor of Electrical Engineering at the University of Newcastle (UON), Brian still holds the title of the youngest person ever appointed to the position of professor at just 26 years old.

“Brian was working in the same field as me, control engineering and optimisation and he had a very high profile. He’d written a number of influential books and had an International reputation,” Graham enthuses. “It was a young department here at UON, and Brian was gathering young people that he saw as capable of growing to do much bigger things – he was looking for the rising stars.”

“It was an amazing time to join the University of Newcastle because we had this inspiring leader and all the people he’d brought in were people with strong ambition to really get somewhere. We were a small enclave, and at that stage the university didn’t have a research focus, but Brian had a vision that Electrical Engineering could be a real research leader.”

Engineering a real world of application

The return to Newcastle has seen a distinguished and prolific career in system science and engineering for Graham, studded with awards, accolades and associations. The author of nine research monographs spanning Control Theory, Adaptive Control and Fundamental Limitations of Filtering and Control, Graham is a prolific author with over 218 international journal papers and over 60 keynote addresses at major international conferences. Alongside his strong academic career, Graham has worked with industry to develop solutions to global problems.

“Over the years I’ve always tried to apply modelling to real-world applications. The general public probably doesn’t have an understanding that everything we do and touch has a strong engineering component: we get in our car, we drive on roads, we brush our teeth…  and it’s those things that really excite me. The sanitation of our water supply was the result of engineering and that’s probably the greatest change to public health ever made.”

Graham’s collaborations are vast, with connections made at what seemed to be just the right time. “For me, research collaborations have been serendipitous. When I came back to Newcastle originally a person I’d worked with at Imperial College arrived around the same time. He’d set up a small local company and contacted me to ask if I could help him solve a problem. I realised that some of the tools we’d used back at Imperial could be relevant and this sparked a successful relationship that’s led to other exciting projects.”

A prolific collaborator, Graham’s career is filled with a diverse array of projects across the innovation spectrum. “There’s something to be said for networking,” Graham admits. “I was fortunate at an early age to become a member of the Australian Academy of Science, and through this, I met the Chief Scientist for BHP who asked if I’d be interested in working on minerals exploration projects – which started off a series of projects in that field.

“Then I attended a seminar in Sweden and spoke on a highly theoretical topic – however, it had resonance with where telecommunications was headed. Afterwards an attendee came up to me and asked if I’d give the same talk at Ericsson AB. His boss was a very forward-looking woman who immediately said ‘You see things differently to us, would you like a small contract to give a control engineering flavour to some of our telecommunications work?’ and this grew into a huge relationship – with the project still ongoing with a new team.”

A fresh treatment for diabetes

Graham is currently heavily involved in work with the ‘artificial pancreas’ which, again, came about through international networking. “I was attending a conference in China and a researcher approached me who worked in the syringe industry. They were looking to expand their business. After a few meetings we received a small contract to scope out options for the future. Although the company decided not to proceed with the project, I’d formed so many medical relationships that I continued the research. I’m now working with teams from the John Hunter Hospital and HMRI and other health researchers across Australia.”

Diabetes is a major world health problem with around eight per cent of people living with the condition. There are a vast teams of people working on new treatments for the disease, but Graham and his team bring a new perspective to the problem, combining medical and engineering expertise.

Graham is Director of the Artificial Pancreas Program, a national, multi-disciplinary collaboration between engineers at UON, and clinicians around Australia. The ‘artificial pancreas’ is actually an algorithm which is aimed at improving the lives of people living with diabetes. An externally-worn insulin pump will employ a complex control algorithm to continually regulate the patient’s blood glucose level by calculating the insulin requirements and adjusting the supply of insulin accordingly.

It's said to be a game-changer in the field.

With a life-long career in collaboration, Graham has a lot of knowledge to share with young researchers looking to make an impact with industry. For research to be innovative, it needs to be grounded in the basics says Graham. “One has to be, first and foremost, good at the fundamentals of research. If you’re not, then you just not competitive in having the additional armour necessary to collaborate with industry and business. With research, if you go applied too quickly, you lack the depth and breadth required for excellence. Working slowly and carefully means you can see things that other people haven’t.”

Graham has recently published his tenth book, which is very different to his earlier publications. Titled: A Doctorate and Beyond: Building a Career in Engineering and the Physical Sciences, it provides guidance on four topics: namely, whether to pursue a doctorate or not, how to do a doctorate, how to use a doctorate in one’s early career and how to be successful in a more senior role in industry or a university. The book contains useful and interesting advice from a range of people, including Professor Brian May (probably better known as the lead guitarist of Queen!)

Graham’s background in physics is at the core of his work. “Once you have a model you can use it to change the way you look at a problem. Even the most complex thing comes from simple beginnings.”