Associate Professor Alistair Rolls is at the forefront of what many may consider 'irrelevance' and he is proud of it. 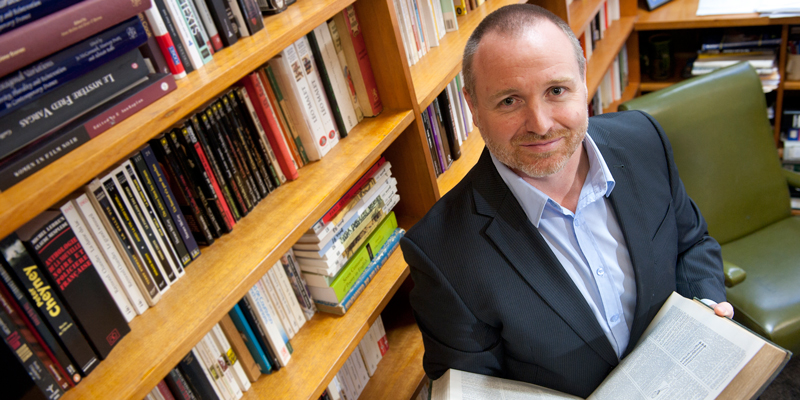 He is a leading expert on Twentieth and Twenty-First Century French Literature, the principal English-speaking scholar on the immortalized French writer Boris Vian and is paving the way forward in the field he calls Fetishism Criticism, a discourse which recognizes that two opposing narratives can co-exist while actually refuting each other.

"I believe deeplythat in order to grow and expand as individuals – to access something precious – we need to do irrelevant things," Rolls says.

"My academic research on literature and poignant literary figures allows for just that. It encourages everyone, not just the academic community, but also a wider audience, to take a text, engage with the words, interact with the message and ultimately form a relationship with the book."

"Now I ask: Have you changed in anyway? Have you grown? What ideas have been ignited?" Rolls says.

He takes this concept one step further and poses this: "If you can read a piece of work, digest it and never change your thoughts, then it doesn't matter what you read, it will have no impact."

Rolls proclaims that this is the power of literature. "It's what you - the reader – actually do with the book that matters and it all begins with irrelevance."

Rolls recalls how pure serendipity played a key part in launching his love affair with the often misunderstood genius known as Vian; the focus of his PhD and countless academic publications that followed. "I was working in a French high school in Bordeaux as an assistant when a fellow teacher gave me several of Vian's books. I began reading his works and didn't have a clue where to start. He posed a challenge unlike other authors I was well acquainted with. I couldn't box him or define him; so instead, I proposed an alternative way to understand him. A series of different lenses, including fetishism and intertextuality which shone a light on his literary brilliance."

Vian remains one of the most well-known popular culture characters in French history, but is disproportionately under-valued alongside other leading French figures of the time, Rolls argues. "Vian had an extraordinary breadth of talent. He was a writer of books, poems, short stories, plays and songs and was also an accomplished jazz musician, mathematician and engineer by trade. Yet, he remains frustratingly misunderstood because he is considered a jack-of-all trades and master of none."

Reflecting on the highlights of his career thus far, Rolls says "I was extremely privileged to join an expert panel of three at the Sorbonne in 2007 and to deliver a keynote speech at the first major Vian academic conference. This was the most flattering honour. Then, in 2010, I was listed in the bibliography of the first collected works of the author, which was a significant acknowledgement of my contribution to understanding the artistic talents of Vian and his influence on our culture."

Rolls is an ideas person and is always exploring new ways and mediums to challenge the norm, provoke new thought and expand creatively.

"My new fascination is crime fiction, and in my book Paris and the Fetish: Primal Crime Scenes, which is due out early 2014, I explore reasonable and radical re-reads of various texts through fetishism. In the Freudian understanding of Fetishism this basically means we know something not to be true but believe it to be true at the same time," Rolls says.

He will also be collaborating with several colleagues from the University of Newcastle from the English and Classics disciplines on the production of articles focusing on various authors.

"This is a unique opportunity to take a new approach - an innovative perspective - and do something irrelevant, but likewise, so very relevant to our personal growth and the intellectual development of our society."