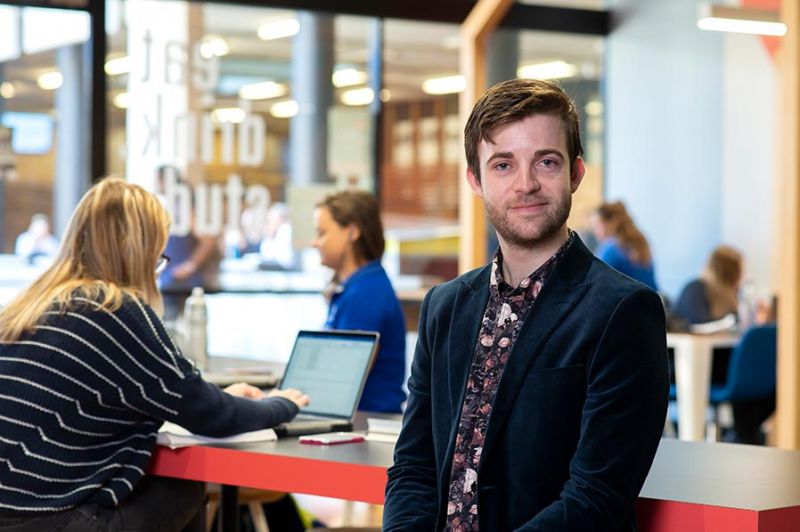 Dr David Betts is a social work researcher who is turning up the volume on the voices of a community that is “hidden and invisible”. His research focuses on the lived experiences of older adults who don’t fit the typical ‘older adult’ mold.

“In particular I’m interested in the experiences of older sexual and gender minorities and how they navigate life and contemporary community and what their historical experiences have been in this rapidly changing social and cultural world,” Dr Betts said.

Dr Betts undertook a study in New Zealand where he interviewed 31 older adults aged 60 – 80 years from a range of sexual and gender minorities, asking them about their forms of social connections. A strong aspect to emerge from his findings is the massive shifts in legislation the cohort had seen across their lifespan, including the decriminialisation of homosexuality and the introduction of anti-discrimination laws and marriage equality.

“The group were in a strong position to reflect on the changes they had seen. The study participants recognised that there have been great advancements but social attitudes haven’t come along in the same way. Discrimination and social stigma still exists. Just because laws have been passed doesn’t mean sexual and gender minorities aren’t exposed to stigma,” Dr Betts said.

Another theme from the study centred on the question of ‘what does older age care mean for sexual and gender minorities’? Dr Betts said many of the study participants were fearful of entering aged care facilities because of the assumption that other residents or workers might hold homophobic or transphobic views.

“There was a really strong belief that they might have to re-enter the closet. A lot of those worries came from their experiences with health professionals generally. Whether it was doctors, counsellors, social workers or nurses, the study participants cited exposure to a broad spectrum of health professionals throughout their life who expressed bigoted views,” Dr Betts observed.

The study participants often mentioned the fact that health professionals seemed to lack knowledge and training around the needs of sexual and gender diversity. Dr Betts is now pushing for health workers to be up skilled to support equality and diversity.

“We need to be vocal and vigilant and we need to make sure that education and training is updated and consistent. We should be actively listening to the voices of diverse communities and making sure their concerns are heard otherwise in terms of social work, we risk perpetuating social barriers, because we think everything’s fine when in fact it’s not,” Dr Betts said.

Social support and the impact on wellbeing

Dr Betts first became interested in the needs of older sexual and gender minorities while working as a social worker in gerontology wards in Christchurch. He noticed a lack of general social supports for people coming into health services and the impact on their wellbeing.

“I was often involved with patients from a clinical health perspective and I saw people going back into the community with very little social supports and often bouncing back into hospital. This happens because often older sexual and gender minorities might not have access to what is considered normal family support. They may have experienced rejection from their biological families and may not have children. This potentially puts this cohort at much more risk, so I began to question how does this cohort cope without the support we take for granted?”

Dr Betts did some exploratory research on existing literature on the topic and found very little. He saw a huge gap in research from a local perspective and wanted to bring local knowledge in to local services.

“A lot of the research that had been done was survey based and very quantative which doesn’t give you the opportunity to hear the true narrative and experiences of people who have lived through so much social change. I really wanted to highlight those voices and acknowledge them in social work education, practice and policy,” he said.

The double jeopardy of age and sexuality

In doing a deeper analysis of the study data, Dr Betts also drew the conclusion that older sexual and gender minorities experience a kind of ‘double jeopardy’ in that they are made to feel hidden and invisible because of their sexuality and their age.

“It’s a cohort that is hidden and ignored as a result of many overlapping factors including the dual impact of general homophobia and ageism. Older adults generally are not considered a worthy subject in society to pay attention to. Plus ageism within LGBTIA community often serves to disregard or ignore older people in the community,” Dr Betts said.

Dr Betts said that a lot of LGBTIA scene spaces and social environments are designed to cater for younger adults and a lot of participants in the study felt they weren’t welcome there or included.

Dr Betts next project will look at the impact that the marriage equality postal survey had on individuals and the community in the Hunter Region. He also plans to research groups that are underrepresented in the LGBTIA community.

“Primarily research tends to focus on gay men and lesbian women. There is limited material on bisexual and transgender individuals and even less focus on gender diverse and gender fluid individuals. I would like to explore these ignored narratives and highlight experiences of people who might not be included in LGBTQIA,” he said.