Teaching history after the end of history 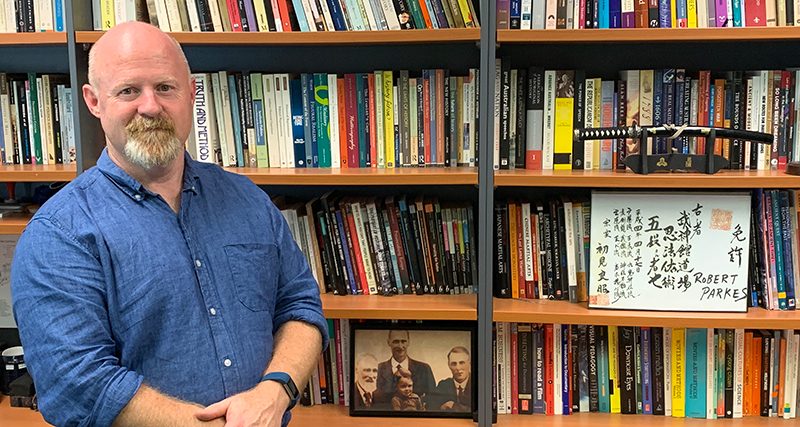 Associate Professor in Curriculum Studies and Acting Head of the School of Education, Robert is interested in how people engage with the past both within schools, and within daily life.

The invocation of historical context and connections as a means of self-formation and legitimising authority in the present are of great interest to Robert, especially within, but not limited to, the arena of martial arts in which he holds black belts in Chinese, Japanese and Filipino martial arts.

A core author for Public History Weekly, Robert creates work that both measures and informs public perceptions of history.

THE END OF HISTORY

Robert’s first book Interrupting History: Rethinking Curriculum After 'The End of History’ was published in 2015 and explores concepts central to his work.

When referencing the ‘end of history’, Robert is referring to the postmodern disruption of singular perspective dominant historical discourses with coexisting and often competing histories of the same events seen from differing perspectives.

“We are faced with these competing narratives, how should they be approached in the classroom?” he queries.

He is now working on a joint book project for Palsgrave, exploring possible pedagogical responses to this question from around the globe.

“Most of the books in this space describe the History Wars in their various countries, but they don't tell teachers what to do. This book is trying to collect scholars from all over the world saying how should we respond to this as teachers,” he explains.

“My work says all forms of history are equally problematic so therefore, we should approach it all with a critical eye.”

“In order to judge the truth claims of any historical text,” Robert says, “you have to understand the method that was used to produce it.”

“Which means that practically, from a teaching point of view, our pre-service teachers have to understand historiography.”

Debate internationally has often concerned itself with whether history education should be taught through a disciplinary model as a discrete subject, or an interdisciplinary curriculum model involving other subjects under the umbrella of social science.

Robert is a firm believer that regardless of curriculum, tertiary level history education should be taught through a metadisciplinary approach.

“Even if the curriculum calls for a disciplinary or an interdisciplinary model, history educators need to be metadisciplinary,” he asserts.

HERMES are looking to contribute to the debate about what people actually learn in history at school.

“When people are asked they often say they did not learn very much,” Robert claims.

“But when we ask them to tell the history of Australia in their own words, a lot of what they tell us is taught in school – quite the opposite of their perception.”

With his HERMES colleagues, Robert is working on a project entitled ‘Remembering Australia’s Past’ (RAP), which explores the depth of knowledge of coexisting discourses within pre-service teachers’ understandings of Australian history.

Adapting highly successful narrative research methodology developed by Canadian Professor, Jocelyn Létourneau, members of the HERMES research group are asking pre-service history teachers to write for 45 minutes in response to the request to “Tell the history of the nation in your own words”.

An extension of the RAP pilot study, the now international ‘Comparing Our Pasts’ (COP) project involves collaboration with researchers in Canada, Sweden and New Zealand, with whom results will be shared and compared.

Key to the comparative study will be determining how the Australian, Canadian, Swedish and New Zealand participants address the Indigenous (Aboriginal and Torres Strait Islander, First Nation, Sami, or Maori) histories of their nation.

Early findings from the Australian data suggest a rather uncritical view of dominant discourses, with the depth of many narratives seemingly ossified at a primary school level.

Robert’s HERMES colleagues are also using this data to inform their work on public perceptions of the Gallipoli campaign and Colonial settlement.

Undertaking a sabbatical in 2013 as a Visiting Research Fellow with the Educational History and History Didactics group in the Department of Historical, Philosophical, and Religious Studies at Umeå University, Sweden, Robert encountered the concept of historical culture, a concept he believes reinvigorated his work.

“Historical culture is the encounters you have with history in your everyday life,” he asserts.

“When I came back from Sweden, I realised there was no education journal space dedicated to looking at historical culture, nor at the notion of historical consciousness.”

“So we formed this journal Historical Encounters, in which we explore historical consciousness, historical culture and history education.”

“We have the most fantastic editorial board of any history education journal in the world. It has had a strong reception, particularly in Europe where the language we are using speaks to them exactly.”

Robert has also enjoyed success with his more publicly accessible work featured in Public History Weekly, an international blog-journal published out of Switzerland.

Among the many postgrad students Robert is supervising, is one looking ethnographically at the pedagogy of martial arts.

“He is looking to see if there is a greater variation between or within martial arts in terms of the pedagogies, and asking an overarching question - is there a pedagogy of martial arts?”

Robert’s first published article was a discussion regarding the mantle held by Ninjutsu as a unique martial art. Published in 1994, before it was commonly accepted, the piece argued that Ninjutsu is in fact a branch of the samurai arts.

“I am examining self formation in martial arts, which fits into my work on identity,” Robert, who has black belts in a Filipino, a Chinese and a Japanese martial art, explains.

“I am interested in the way people see themselves as part of traditions, or not, and the subsequent reinvention of tradition, and investigating the ways martial artists use history a means of legitimisation of their authority.”