Internationally renowned men’s health expert, Professor Philip Morgan’s multi-award-winning lifestyle programs are helping dads improve their diets, activity levels and parenting skills so they can pass on healthy habits to the next generation. 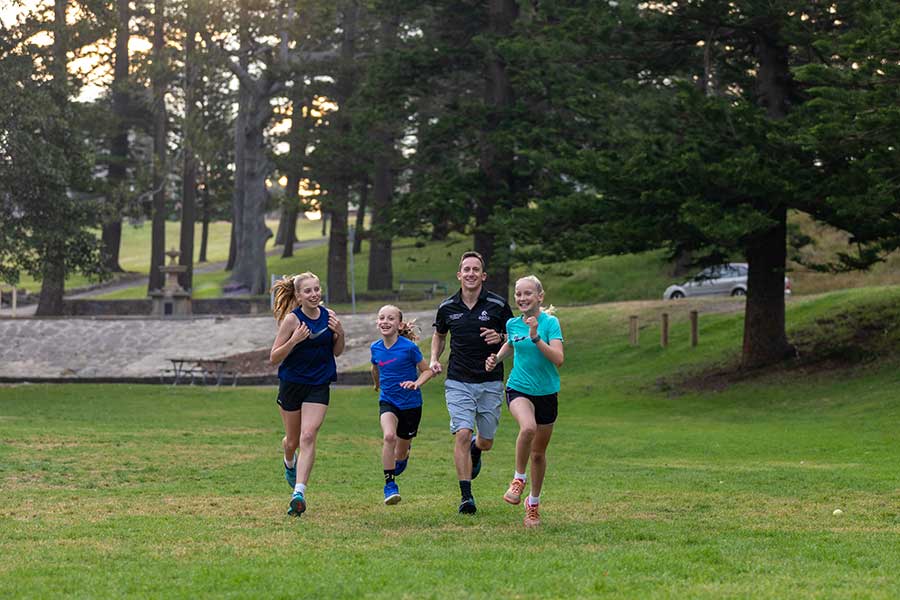 By encouraging better health and teaching dads about the unique and significant influence they have on the health of their family, the programs empower fathers as positive role models for their children, creating important intergenerational health benefits. Fathers also learn positive parenting strategies and connect with their kids during fun physical activities, resulting in improved relationships within the family.

“The major focus of my work has been developing programs for fathers, motivating them to be good role models and engaged fathers who are equipped with the parenting knowledge and skills they need to raise healthy and active children.”

Philip’s research affirms the role of fathers as unique to children’s healthy development. In fact, his research findings show that healthy dads raise holistically healthier children. By honing in on the important influence of fathers on children’s wellbeing, Philip’s programs are motivating dads to improve their own health and creating powerful flow-on effects for the entire family.

“While there is limited research examining paternal influences on children’s lifestyle behaviours, within the child development literature there is overwhelming evidence that fathers influence children in nearly every characteristic studied—academic performance, language development, cognitive, social and behavioural development, intellectual functioning, and physical health.

“My work seeks to better understand the influence of fathers on their children’s physical activity and dietary behaviours so we can optimise the health of families.”

Despite their influence on little ones, many Australian men find it difficult to adopt the healthy habits they so earnestly want for their children. And when their health starts to slide, men are also less likely to sign up to nutrition and exercise programs than women. Tapping into the male psyche has been key to the success of Philip’s research programs.

“A real challenge is designing programs that appeal to fathers. There is a severe under-representation of fathers in paediatric research and community programs internationally—they make up less than 6% of participants in family-based lifestyle programs!”

Australian men are also among those most likely to struggle with weight gain. Yet research to date has primarily focused on supporting weight loss endeavours among women, leaving a gap in the research when it comes to Aussie blokes.

“Men are seriously under-represented in weight loss research, which is a major concern considering 70% of Australian males are considered to be overweight or obese.

“We now live in an ‘obesity promoting’ environment. Nutrient-poor, kilojoule-dense foods are more easily accessible and available. Movement has been engineered out of lives through technology and our current physical environment has been described as activity-sapping. Movement is no longer the default option. Technology has played a role, as have our busy lives.”

Philip’s programs aim to prevent poor health habits from being passed on to the next generation. By actively teaching and modelling positive exercise and nutrition habits to their children, both mums and dads play a critical role in shaping the health of Australian children.

“Parents have a profound influence on the lifestyle behaviours of their children but less than 1% of Australian families would meet recommendations for physical activity, healthy eating and weight status.”

Philip’s flagship programs include Healthy Dads, Healthy Kids; Daughters and Dads Active and Empowered; Healthy Youngsters, Healthy Dads; SHED-IT, and Workplace POWER. From their roots in the Hunter, NSW, these internationally acclaimed programs are now being expanded worldwide following incredible demand from the global academic community, as well as from not-for-profit, government and corporate sectors.

Healthy Dads, Healthy Kids is the world’s first program to target fathers in positive lifestyle role modelling and effective parenting strategies to improve the physical activity and dietary behaviours of both themselves and their children.

“Making physical activity fun, and something that kids love to share with their dad, is key to the project. At the same time, we are inspiring children to support their dads by role modelling healthy lifestyles themselves.”

Healthy Dads, Healthy Kids has been widely applauded for its innovative approach and impressive outcomes, receiving multiple prestigious awards, including an Excellence in Obesity Prevention award from a World Health Organisation Collaborating Centre on Obesity Prevention and a Business/Higher Education Round Table B-HERT Award for Best Community Engagement. Following this success the program has now been adapted, trialled and delivered to communities in the UK and Hispanic families in the USA.

A recent spin-off of this program, Healthy Youngsters, Healthy Dads, targetspre-school aged children and their dads based on the knowledge that early childhood is a critical period for developing positive behaviours for future health and wellbeing. Over 200 families will participate in this ground breaking program as it is developed and evaluated in the Newcastle region.

Workplace POWER (Preventing Obesity Without Eating like a Rabbit) targets men in the workplace. Using gender-tailored resources, the program has helped hundreds of blokes across Australia improve their lifestyles, including employees of QLD police, TransGrid and Tomago Aluminium. In 2013, the program received the inaugural National Preventative Health Award for the best initiative in Workplace Health and Well-being for large workplaces.

Launched in 2015, the Daughters and Dads Active and Empowered program empowers fathers as agents of change in their daughters’ lives, consequentially improving girls’ physical activity levels, sport skills and social-emotional wellbeing. The program is the first ever to target the father-daughter relationship as a novel engagement mechanism to improve social-emotional wellbeing and physical activity in girls.

Following its impressive results in the Hunter region, the NSW Minister for Sport recently approved $2.4 million of funding to disseminate the program across NSW and develop sport-specific adaptions with a number of leading sports organisations. The program is already being delivered in the UK in a collaboration with Women in Sport-UK and English Premier League Football clubs.

“Bringing dads into their daughters’ lives through physical activity and sport has been a fantastic outcome of the study.

“Our results not only showed that dads and daughters were more active, but that the girls also felt better about themselves, had stronger relationships with their fathers and were doing more activities together as a family.”

After dedicating years to the successful facilitation of his research programs in Hunter communities, Philip is now focused on training a team of facilitators to deliver his pioneering programs across Australia and the world.

“I love seeing how the programs we have developed positively impact families’ physical and mental health, putting children on more positive life trajectories. I’m motivated to see the widespread roll out of these programs, and create a significant impact for communities across Australia and the globe.”