A concrete foundation for fitness

Dr Narelle Eather believes encouraging children to be more active is easier than people think - it's all about giving them the right tools. 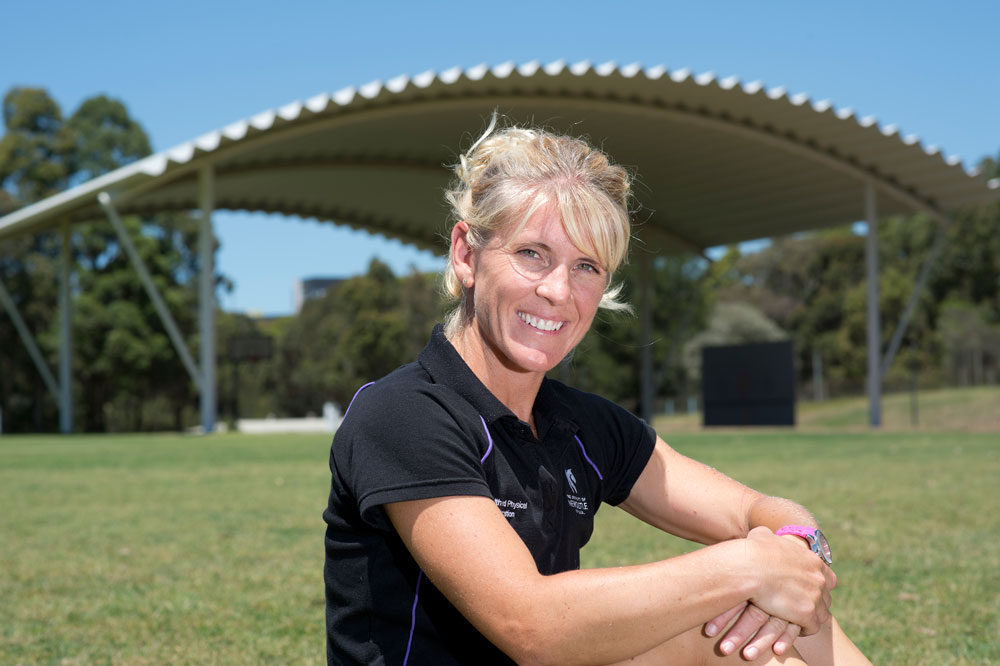 Despite pessimistic talk of a generation of computer-obsessed kids doomed to grow up unfit and unhealthy, Eather is encouraged by the results of a physical activity intervention program she delivered to primary school students during her PhD.

Titled Fit 4 Fun, Eather was prompted to create the program during her time as a secondary school teacher when she observed her students' lack of confidence and competence in physical skills.

The curriculum program is targeted at primary school children in years five and six and is designed to improve their skills, knowledge and attitudes towards physical activity – and boost their fitness levels.

"With a lot of the children I was teaching, I found that fundamental movement skills were poor and fitness levels were low. This not only impacted their physical abilities but also their confidence, and their social and emotional health. This was largely because of inadequate sport and physical education programs in primary schools," explained Eather. "Meaning, the children were not developing the skills and attitudes necessary for a lifelong commitment to good health."

"Studies have shown that attitudes and behaviour developed in primary school carry through to adolescence and adulthood, which is why I decided to target my program at younger children – so we are affecting change before those attitudes are cemented.

"During the study, I found that attitudes towards physical activity participation had changed greatly and fitness had improved significantly in just eight weeks, which suggests to me that small but specific changes in the school and home environment can lead to very important positive health outcomes for children."

Eather also recognised that primary school teachers were often ill-equipped to deliver quality physical activity programs, either because of a lack of pre-service training in this area, confidence to deliver such programs or the absence of relevant teaching aids. Consequently, one of the aims of her project was to build a resource that can be used by any classroom teacher.

Since 2009, Eather has not only focused on completing her PhD part-time, she is also Lead Investigator on the Cross Fit Teens Program: Improving health-related fitness in adolescents, and is Chief Investigator on several research projects currently running through PAN, including Stand Up for Healthy Minds study: Evaluation of a multi-component intervention to reduce screen-time in adolescents; HIIT: The impact of high intensity interval training on physical and psycho-social outcomes in adolescents; and Dads And Daughters Exercising and Empowered (DADEE):  Engaging fathers to improve physical activity levels and social-emotional well-being in their daughters.

Supported by the Port Waratah Coal Services Community Investment and Partnership Program, DADEE is aimed at engaging fathers and daughters to help instil primary school aged girls with the skills needed for a healthy and productive life.

Research shows that more than 80 per cent of girls fail to meet physical activity recommendations and fewer than 10 per cent can adequately perform fundamental movement skills such as kicking and throwing – results that are significantly worse than for boys of the same age.

Conceived by Professor Phil Morgan, DADEE will be rolled out in 2015 by a team that includes Professor David Lubans, Ms Alyce Barnes and Eather.

"The DADEE program has created a fantastic opportunity to investigate and highlight the important and pivotal role that fathers play in the lives of their daughters – a role that is often overlooked or dismissed in today's hectic world," said Eather. "Watching how much joy the young girls express when they interact with their fathers in the program is just one of many of the benefits of being involved in this fantastic initiative."