Newcastle is no longer the ‘steel city’ it once was with a new focus on the growing area of creative industries. Screen production scholar Associate Professor Susan Kerrigan has the data to prove it; having worked on an Australian Research Council funded project that confirms creative activity in the region is on the rise. 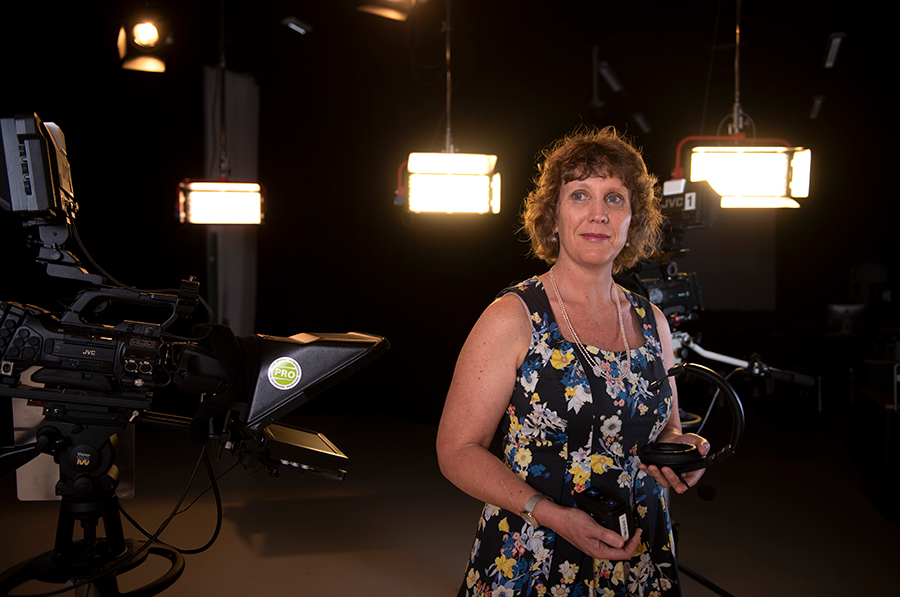 What are the creative industries? Who works in them? How many people do the creative industries employ in the Hunter Region? They are the types of questions asked by Associate Professor Susan Kerrigan in the research project Creativity and Cultural Production in the Hunter Region. Associate Professor Kerrigan was part of the team of scholars, all also Creative Industries practitioners, who ran the project that saw 115 ‘creatives’ interviewed in the region as well as significant observation in the field of those industries.

Associate Professor Kerrigan worked in close collaboration with team leader Phillip McIntyre and industry partners on the project with the aim of mapping the creative industries (CI) activities in the Hunter region. Associate Professor Kerrigan says this was achieved by simply going out to talk to people and observing what they do, using an applied ethnographic approach.

“My colleagues and I really wanted to put the Hunter on the map because there are a lot of creative activities going on here. But because of Newcastle’s longstanding relationship with BHP it’s known as an industrial city and a pathway to the mining industry, it’s often forgotten in terms of it’s creative capacity,” Associate Professor Kerrigan said.

Associate Professor Kerrigan’s background is in film-making and screen production, so it was natural that her part in the project centred around film work, producing ethnographic video interviews with selected study participants. The interviews make for interesting viewing with the creatives offering their opinions on the CI space, how their businesses operate and what’s working in the ever-changing technological environment.

“People keep thinking it’s all about the digital in the creative industries. It’s actually a relationship between the traditional and the digital, because you can’t have one without the other. Unfortunately the digital age is very much about the collapse of the more traditional media business models. A lot of those are failing and new innovations are taking their place, so we looked at what happens when those kind of things collapse. It’s a dynamic and active space because of the digital disruption that is occurring,” Associate Professor Kerrigan noted.

“What we discovered is the growing areas are in design, website design, and advertising. There’s a big push these days for companies to communicate and promote themselves in creative and funky ways in order to engage clients and build reputations. We also did some statistical research based on Census data from 2011 and 2016 and found there has been significant growth in the creative industries in the Hunter region.”

The main project outcome is the presentation of the research findings to policy makers, industry and academia to inform their practice and to increase their understanding of factors affecting creative output in an increasingly technological world. Dr Kerrigan said that the term ‘creative industries’ has become a buzz-word with many people trying to work out how they can get in on the action.

“The 115 people we interviewed are another audience who are interested in our findings because they’re trying to work out what the creative industries are themselves. Our research illustrates the different types and forms of creative activity in these industries – everything from the traditional visual arts, design and music, to more modern forms such as interactive content creation and public relations,” Dr Kerrigan said. “More broadly, these findings will also inform undergraduate students and parents interested in what their kids might do if they were to study in the creative industries. They’re asking ‘What is it and can you make a living out of it?’ We found that it’s definitely a growing area and the largest part that is growing is in design,” she concluded.

Following on from her ethnographic research in the Hunter, Associate Professor Kerrigan is working on a new project, Australian Cultural and Creative Activity: A Population and Hotspot Analysis,that aims to grasp the contemporary dynamics of cultural and creative activity in Australia.

She says this is a comprehensive project that will advance the integration of quantitative and qualitative research strategies, painting a complete national picture, while also exploring the factors that are producing local and regional creative hotspots.

“This is a huge project with a big team led by Queensland University of Technology Distinguished Professor Stuart Cunningham. In this project we’re using a model called the trident methodology that is basically about where creatives get employment. This falls into three categories: specialists, support workers, or embedded creatives. We’re drilling down into those differences about how people are employed and we’re going nation wide, so we’ve really scaled up.”

From behind the camera to in front of the class

It was Susan’s love of the visual medium of film that prompted her to complete her Bachelor of Arts in Communication Studies at the University of Newcastle. After that she worked for 13 years at ABC Television producing and directing across a variety of live and pre-packaged productions (including Wildside, GP, Big Sky, Play School) using multi-camera and single camera approaches.

While she was on maternity leave from the ABC, Associate Professor Kerrigan sought a change of pace from Sydney life and so she came home and took on a position teaching screen writing for documentaries at the University of Newcastle. She soon found herself happily immersed in the world of academia.

“I’m dyslexic so the reason why I worked in television is because I liked images, I didn’t like words very much. The only reason I considered applying for the academic job was because someone told me I could do a PhD where I could make a film and I thought ‘well I can do that’, but I couldn’t ever do a 100,000 word thesis,” Associate Professor Kerrigan said.

Susan discovered her dyslexia later in life when her own daughter had trouble with spelling. She found that coloured Irlan lenses work well for her and have allowed her to achieve what she has today.

“The Irlan lenses basically changed my life, reducing my headaches and increasing my comprehension of information. I’ve got a very good memory but it’s hard for me to read things.  I couldn't do the job I do now without them,” she said.

For her PhD she made a film called ‘Using Fort Scratchley’ which was funded by Newcastle City Council. It was at this time she started to explore what it was to be creative as a filmmaker.

“That theoretical underpinning around creativity as a systemic process has continued throughout all my research which is how I ended up working on the Hunter Creative Industries project. We not only looked at how creative industries function from the outside, but we also looked at how practitioners work, how they are creative while keeping themselves financially afloat as they manage ‘love’ jobs with paying the bills,” Associate Professor Kerrigan said.

“I’m interested in all things creative. The thing I really enjoy about being an academic is explaining what creativity is and breaking it down to something that is practical and hands on and actually useful for students now and as they move into their careers.”

She is a strong believer that education provides opportunities that you didn’t even know existed, particularly inside the creative industries, and has witnessed changes over the years which mean students exit their degree programs and go into jobs that were un-heard of when they started University.

“I had a student and when he started his course newspapers were all paper based. Three years after he graduated he was making videos for The Australian. That job didn’t exist when he started his degree. In such a short time we’re seeing remarkable change. But it’s also sad as some of the more traditional pathways to careers are starting to collapse and we’re seeing a need to combine many skills together in order to look employable and that can be challenging.”