Reflections on war and visual culture

Dr Kit Messham-Muir is fascinated by what most of us would consider the darkest area of visual art – the work of the war artist, the conflict photographer, and the memorialist. 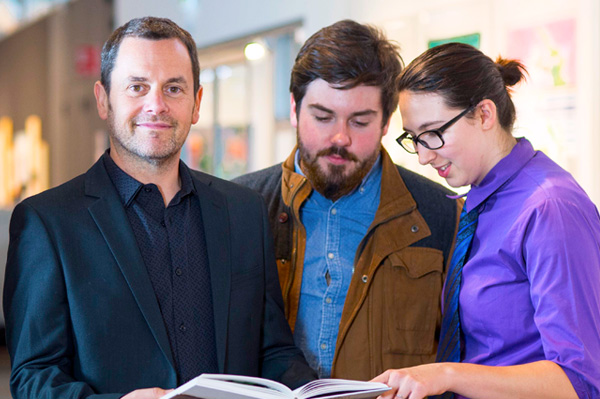 Dr Messham-Muir is an art theorist and collaborator at the University of Newcastle's (UON) world-first Centre for the History of Violence. The Centre aims to advance humanity's understanding of violence and conflict through new research. Members of the Centre explore all aspects of the history of violence including concepts of violence, representations of violence, and issues of political and cultural violence.

"I'm both fascinated and repelled by war but I am naturally a pacifist. It is the visual culture of war that I find interesting; the images and the work of the war photographer. It's a powerful and perhaps sometimes even exhausting area to research."

The book follows on from Dr Messham-Muir's previous research looking at the ways in which conflict and violence are interpreted in Holocaust museums, particularly the role of emotion in museum displays.

"Holocaust museums often make powerful emotional connections with visitors. They draw on particular strategies, such as using dark spaces and evocative artefacts, to convey the emotional narrative of the Holocaust. My research studied how images and objects can strongly affect people. I'm fascinated by the emotional power of all images, not just art, but in the news media, movies, television, and this is what I continue to research."

Extending upon his research into war and visual culture, Dr Messham-Muir is now working with the Australian War Memorial on plans for an exhibition and a book about contemporary Official War Artists, such as Ben Quilty and Shaun Gladwell.

As a teacher, Dr Messham-Muir is also the recipient of several teaching awards. He recalls his own experiences as an undergraduate art student in Sydney as being instrumental in informing the way he teaches today.

"As an undergraduate painting student I didn't see how art history was relevant to me, but when I tried to set out as a practicing artist I realised how much I'd missed by thinking that way. After I did my PhD in art history and theory I wanted my own students to see how interesting and important theory is. So my teaching is about engaging the students in ideas around art and culture so they understand how they fit into the larger art world."

Dr Messham-Muir recently took a group of undergraduate students to Los Angeles and New York, not only to teach the significance of collections at the Getty, LACMA, MOMA and the Met but also to meet internationally successful artists in their studios.

"One of the artists they met was Ian Burns who is a UON graduate. He's lived in New York for nearly 20 years and I wanted them to meet someone who had been through our program and was now practising in New York and enjoying an international career. I try to introduce them to the people that I've connected with overseas over the years, who can give them real practical advice, like how to approach commercial galleries, how to sustain a career, how to be a successful studio artist in tough art world."

During his career, Dr Messham-Muir has received three excellence awards for teaching, authored two publications on visual culture, published fifteen articles in The Conversation, and founded a successful video series on YouTube with over 43,000 views.

Find out more about Dr Messham-Muir's book, Double War: Shaun Gladwell, visual culture and the wars in Afghanistan and Iraq'

Find out more about our Fine Arts Degree

Link to interview with Shaun Gladwell