Dr Kit Messham-Muir is an art theorist and museologist in the School of Creative Arts at the University of Newcastle whose current research focus is the psychological and emotional dimensions of visualising war. 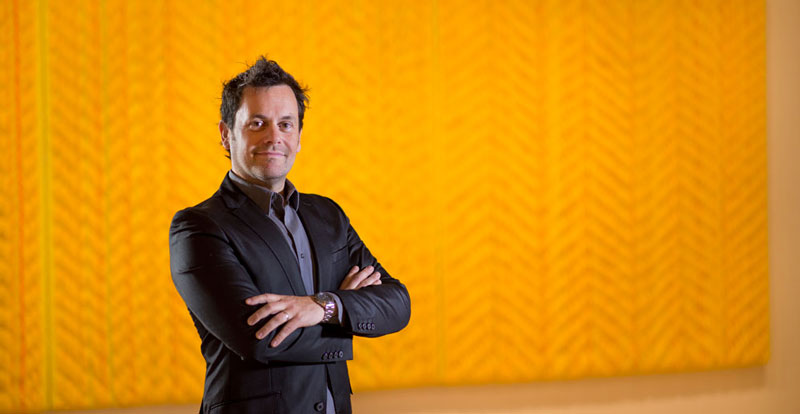 "We get lots of images of war from overseas, which is primarily the domain of the media. We get to know war through embedded journalists in war zones who are after particularly impactful sound bite versions of the situation – because that's what news is," explains Messham-Muir.

"When an artist goes into war they look at it differently."

"The artist's mission is not to simply record, but to consider in a subjective way, over a long timeframe, and respond," said Messham-Muir.

It is this, Messham-Muir believes, that provides the public with an all-important different view of war.

Drawing from many hours of interviews between Gladwell and Dr Messham-Muir, Double War explores Gladwell's Afghanistan work, placing it within the context of the visual culture, technology and politics of contemporary war.

The book combines primary research of interviews with Gladwell over a period of a year with current critical debates on art and visual culture.

It is due to be released with Gladwell's survey exhibition and commission at UNSW Art & Design Gallery and the Sherman Contemporary Art Foundation in March 2015.

Messham-Muir plans to follow-up this work on the use of images during the war on terror by looking at the ongoing use of imagery in warfare and terror.

"I will be looking at where some contemporary images of terror originate, and will deal with some horrific imagery – I actually recoil from those kinds of images on a personal level, but as an academic, I'm also fascinated by why that might be."

"With images of beheadings in the media recently, we can trace the western world's fear of those images back to European orientalist paintings, like Henri Régnault's Summary Execution under the Moorish Kings of Granada, from 1870, which hangs in the Musée d'Orsay in Paris.  The painting is of a middle-eastern man wiping the blood off his sword with a decapitated head on the floor in front of him.  The important this is, it is painted by a European for a European audience.  It's a western construction of the middle east, for consumption of the west."

"This ongoing history of these kinds of images of the middle east, as a place to be feared, is played-out in contemporary warfare, like the current conflict with ISIS. We're seeing them actually take on board how the west's historical fear of the middle east is articulated through imagery, and to use it to maximum effect to shock."

This work links Messham-Muir's research with the University's Centre for the History of Violence – of which he is a member.

While Messham-Muir's research is primarily concerned with affect and interpretation, he is also passionate about encouraging people to connect with art.

"I came from Wrexham, a very working class town in North Wales, and when I was growing up there, art wasn't very highly valued. But, I had an excellent teacher who opened art up for me and helped me understand that it isn't this middle-class rarefied thing – it is actually dealing with ideas, it's a different way of thinking. Ever since then, the thing that motivates me is trying to find ways for other people to also see similar value in art."

In August 2014, Messham-Muir wrote a piece for online media outlet The Conversation titled: Three questions not to ask about art – and four to ask instead.

Over 80,000 people have read the article, and it will be included in The Conversation's year book, to be released in 2015.

"The readership of the article proved the very thing that motivated me to write it in the first place – that the vast majority of people feel a sense of alienation and disconnection from art, but they're still curious.  They still want to find a way in, to understand it." said Messham-Muir.

"Art is just another way visually or materially articulating ideas that doesn't have to follow strictly scientific or systematic ways of thinking," he explains. "I think that's one of the most amazing things about art – it validates a very subjective way of thinking."

StudioCrasher is an ongoing video project launched  by Messham-Muir in late 2012. He interviews artists about their practice, as well as curators, critics and academics.

Messham-Muir's StudioCrasher YouTube channel is a rich knowledge sharing resource that can be used for teaching and research by anyone. It brings art students into contact with real practicing artists, curators and writers who they would otherwise not be able to access.

The video recordings in the StudioCrasher project aims to answer a fundamental question: what actually is contemporary art practice? Interviews are extended and in-depth critical inquiries into the practice of artists, curators and writers engaged in contemporary art discourse. Commentaries provide critical reflection on contemporary art exhibitions and debates.

It's extremely important for visual arts students to be exposed to real-life contemporary art practice. StudioCrasher is building a unique strong repository of interviews available to students and other academics, which will be valued for years to come. This is truly innovative teaching - no one else is doing this.