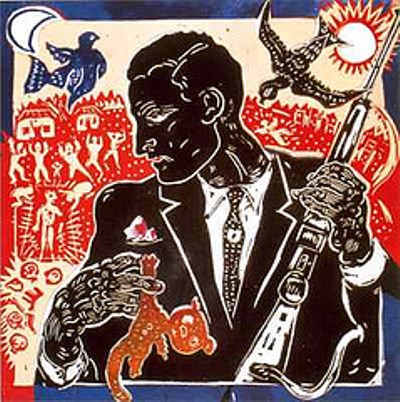 Officially appointed as the Head of the discipline of Design, Professor Minichiello has a reputation for innovation, taking risks and developing different ways of thinking.

Although born in Italy, Professor Minichiello started his professional career in the United Kingdom. He worked for seven years for BBC Newsnight as a reportage illustrator making drawings for events such as the Spycatcher Trials, and pre-television coverage of the House of Commons, including the Guildford Four appeals and Beirut Hostage releases.

During his 15 year career he has also worked for the Guardian, The FT, Amnesty International, the Terence Higgins Trust, BBC Enterprises, Longmans, The Times and ITN News.

Professor Minichiello's most brazen post was when he worked as an artist during the Afghanistan War. During this time be created the book, The Art Of Conflict?, which is a record of reportage drawings of the war.

Professor Minichiello also covered the 2007 APEC Summit in Sydney with a range of drawings published in the Sun Herald.

In research, Professor Minichiello is focused on the role of design and visual communication in the areas of climate change, economic betterment and human behaviour.

"I went to art school to explore an irrepressible instinct to explain the world visually," he says. "I studied graphic design because I wanted to help change that world for the better."

"In this way we are developing the human capacity to meet the challenges of our future. The chance to influence how people in any society think and behave, even for a brief moment, is a positive intervention in a world that is increasingly concerned with mindless celebrity, consumerism and self-interest."

Professor Minichiello has received acclaim from many in his industry and beyond.

"Some drawings impress with their emotion and humanity, others impress with their technique; Mario's do both and, what is even better, because of the nature of their questioning, they make even this most cynical old hack want to go out and draw the world afresh," said cartoonist Steve Bell.

"The [Spycatcher Trials] case generated a flood of witty political cartoons, but one of the most memorable contributions were the sketches by Mario Minichiello of the court room drama. Mario Minichiello's work vividly recalls important happenings that are beyond the gaze of most members of the public in a world in which the camera continues to be excluded from the courtroom," said Law Lord Anthony Lester QC.

Professor Minichiello's current role is to lead the team of design staff to deliver world class research, as well as prepare the next generation of visual communications students for enriching and successful careers.

Since joining the University it hasn't taken Professor Minichiello long to make a name for himself. Minichiello is the man behind the striking range of illustrations for strategic documents such as The Innovator and NeW Directions Strategic Plan 2013-2015. Professor Minichiello is also the Head of the  newly formed Hunter Centre for Creative Industries and Technology, a research cluster that brings together representatives from a industry, business, government and the university to develop research breakthroughs and new ways of thinking.

More examples can be found at: