Maynard's journey began with a desire to piece together a family history and has now seen the University of Newcastle Professor become one of the world's most prolific and respected voices on Indigenous history, internationally regarded as an expert on issues ranging from military involvement to political activism and sport. 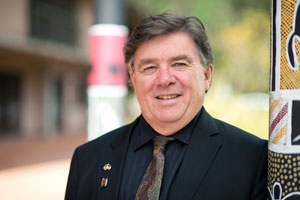 "The first three decades of the last century continue to be neglected in the history books for both Native Americans and Indigenous Australian politics," Prof Maynard said.

Prof Maynard sees many similarities and differences between Native American and Australian Aboriginals in modern, contemporary politics, especially during the 'missing period' of the 1900s to 1930s.

"Native American historian, Vine Deloria Jr, once described this era as 'the most significant three decades in Indian history' due to the impact of government policy and the removal of the majority of Indian land," he said.

"There is a lot of historical material in the United States concentrated on the 19th century, but all the material is about the wars and the battles of the Little-Big Horn, Custer, Sitting Bull, Wounded Knee and the massacres."

"My research is shining a light on the similarities between Australia and America, and there are many. Like Australian Aboriginal people, Indians were fighting to protect massive amounts of land which was being ripped away."

"Another similarity was the institutional system in both countries, with Indigenous children being trained as labourers and domestic servants."

"A major difference was that Indians did have opportunities for higher education in the late 19th century and the early 20th century. There were Indian doctors, lawyers, politicians and academics."

"That wasn't the case in Australia. We had some very eloquent and well-written Aboriginal people but they were self-educated. We didn't have an Aboriginal person at University until 1964 with Charles Perkins, so there was a very big gap there."

Maynard is a firm believer that education is the great leveller. At the forefront of Indigenous education for the past quarter of a century, the Wollotuka Institute at the University of Newcastle that Maynard was a former Director of, employs 46 indigenous staff and is a leader in international collaboration.

Exploring the similarities of returning Aboriginal and Native American WWI servicemen in political activism is another subject of Prof Maynard's research interest.

Funded by a national Australian Research Council grant, Maynard leads a project, Serving Our Country, that explores the role of Aboriginal people with the Australian and New Zealand Army Corps. His findings are expected to shift the Australian historical perspective of Aboriginal involvement in conflict before the ANZAC Centenary Commemorations from 2014 to 2018.

"Serving Our Country will look at the complete history of Indigenous involvement with the military from the Boer War right through to Afghanistan and Iraq," Prof Maynard said.

"During World War I, Aboriginal and Native Americans felt they weren't just fighting for their so-called country, they were fighting for social and political change back home," he said.

"They were under what I would call the misguided belief that that would be recognised and that government in both countries would make changes to improve Indigenous living and outcomes."

"However, a lot of those returned servicemen became quickly disillusioned and some, highly politicised. Critically, at the same time, they were fighting for self-determination and that was front-page news in both American and Australian press."

Prof Maynard's grandfather, noted political activist and the President of the Australian Aboriginal Progressive Association (AAPA), Fred Maynard, was one of those people fighting for self-determination in this period.

"Most Australians see Aboriginal self-determination as belonging to the 1970s and the Whitlam government, and this is not the case," Prof Maynard said.

In his paper, Fred Maynard and the Australian Aboriginal Progressive Association (AAPA): One God, One Aim, One Destiny, Maynard stated that 'the groundswell of Aboriginal resistance to domination has been on-going since Cook and the Endeavour first appeared over the horizon'.

"There were a lot of Aboriginal dock workers working in Sydney and around Australia at the start of the century - including my grandfather," he said.

"African-American and West Indian sailors were arriving on the merchant ships at the height of the white Australia policy. For black men to come off a ship and walk the streets of Sydney, Melbourne, Brisbane and elsewhere - it wasn't very comforting, friendly or inviting.

"Straight away they connected with the Aboriginal workers on the dock and were introduced to their community. This was the beginning of the connection between the African-American and Aboriginal political movements."

A number of respected historians have recognised the importance of his work, with Professor Henry Reynolds stating Maynard 'has made a major contribution to Australian historiography'.

This reputation is reflected in his position on a number of boards and councils - including the Executive Committee of the Australian Historical Association, the New South Wales History Council, the Indigenous Higher Education Advisory Council and the Australian Research Council College of Experts. He is also Deputy Chairman of the Australian Institute of Aboriginal and Torres Strait Islander Studies (AIATSIS).

From the Worimi People of Port Stephens, located an hour from Newcastle City Centre, Maynard was inspired by his family history to write a book on Indigenous identities in racing. The book, Aboriginal Stars of the Turf, earned him the Dymocks Reader Choice Award and features his father, renowned jockey Merv Maynard.

Professor John Maynard's other books include the Aboriginal Soccer Tribe and the Fight for Liberty and Freedom, which was shortlisted for the Victorian Premiers History Award.

Other books that Maynard is contributing to due for release in 2014 include one on convict artist, Joseph Lycett, titled True, Light and Shade for the National Library and one titled Living with Locals, that he is producing with his wife, acclaimed historian, Victoria Haskins.

Living with Locals explores the stories of convicts, lost explorers and shipwrecked people who ended up living with Aboriginal communities and how they survived and adapted.

NIRAKN is a multidisciplinary hub and spokes-model network of Indigenous researchers, comprising of 44 indigenous academic network participants from 21 universities.

Mapping historical and contemporary Indigenous advocacy through oral and documentary histories, Prof Maynard drew on the Aboriginal word for 'history, long ago, since and past' – Yuraki – which is from the Awabakal people in Newcastle.

Building on this network, Prof Maynard has also facilitated a group at the University of Newcastle called the Purai-Indigenous Global Indigenous Diaspora Research Centre – which includes 14 academics across the University connected through global indigenous and diaspora studies.

Capturing the missing pieces of Yuraki is not only important for the history books, but for also changing current misconceptions and perceptions of Indigenous culture, but Maynard is still driven by his original intention

"I'm still writing for my family – but it's also for all Indigenous and non-Indigenous people to enjoy and learn from now."