One of the greatest challenges in medicine is the provision of new antibiotics in the face of increasing resistance. One solution may prove to be natural product biosynthetic engineering to create unnatural antibiotics, antivirals, and immunosuppressants.

The past two decades have witnessed major advances in our understanding of natural product biosynthesis, including the genetic basis for toxin production by bacteria, algae and fungi. Cyanobacteria (blue-green algae) have drugs encoded within their genomes, some of which are potent toxins and potential therapeutics.

Research in this area has provided evidence of genetic recombination and possible gene transfer in aquatic environments. It is also piecing together the cellular regulators of toxin production, as well as associated transport mechanisms. Importantly, this research is also hinting at the unlimited scale of potential.

Brett's talk outlined how current directions in drug design and sustainable production, extremophile biology, bioprospecting, and ethnopharmacology are being used to discover and produce new drugs. 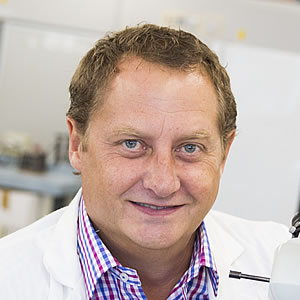 Brett Neilan is a molecular biologist and professor of microbial chemistry. Prior to obtaining his PhD in 1995, Brett worked as a medical researcher, hospital scientist and forensic biologist. He then studied as an Alexander von Humboldt Fellow in Berlin and a NASA planetary biology intern at Stanford University.

The main topic of his work is the genetics of toxic bacteria and algae and the research has led to an understanding of the biochemical pathways that are responsible for the production of toxins in water supplies and seafood. The research has been awarded three Eureka Prizes, the Australian Academy of Science Fenner Medal and the NSW Scientist of the year.

Apart from the genetic signatures of life, his work also involves the chemical constituents of fossilised and extant microbial communities, many from Earth’s extreme habitats. The ultimate goal of this work is to understand how the physiologies of microbial life have formed the planet we live on today and how they can be exploited for biotechnology.

As Head of the School of Environmental and Life Sciences at the University of Newcastle, Brett continues his research whilst facilitating the fusion of the diversity of skill sets within the School, “The future of the sciences is in collaboration and interaction,” he says, “We should define ourselves by what we give to society at the end of our investigations.”