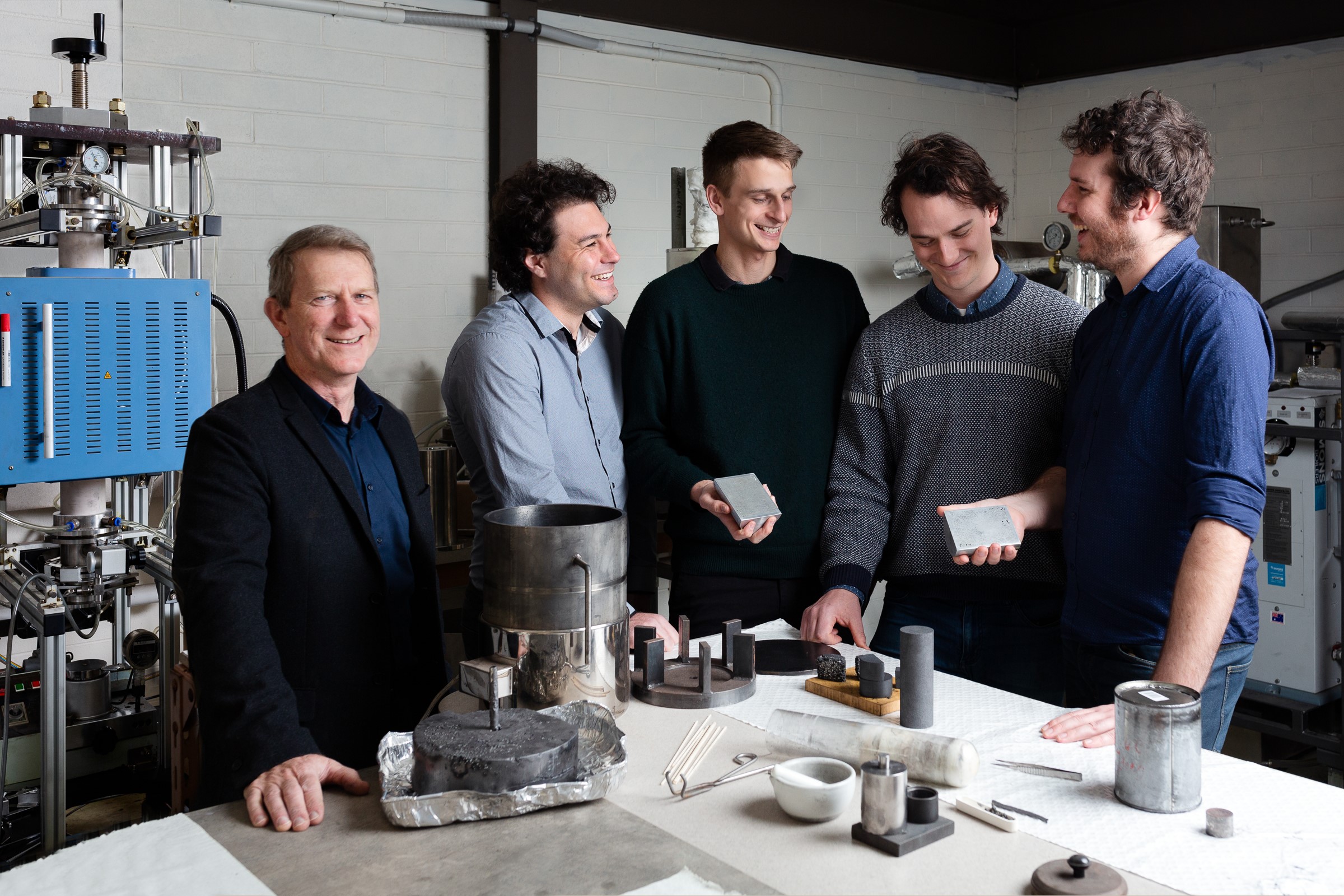 Alex Post is one part of the MGA Thermal team looking to revolutionise energy storage and accelerate the shift to renewables.

Running a startup can be both a marathon and a sprint, according to Chief Innovation Officer Alex Post of MGA Thermal.

“It can be stressful at times, the constant travel and constant meetings,” he says. “Things are starting to go well, but there have been times when it felt like a massive slog, lots of talking without results. It helps if it’s something you’re passionate about.”

Working in a startup, Alex and his five colleagues have to be constantly prepared for ups and downs. It’s quite a different life from his previous academic career. In 2013 he received degrees in Mechanical Engineering and Physics from the University of Newcastle. Then he worked at CSIRO in Mayfield on solar thermal power, which is the conversion of sunlight into electricity.

“After that I started my PhD at the University of Newcastle with Professor Erich Kisi, our CTO at MGA Thermal (MGA stands for miscibility gap alloys.). That was on the same subject as my work at CSIRO, still working on thermal. Meanwhile, the MGA stuff was going on in the background. I was exposed to it because Erich was my supervisor. I was thinking ‘this is fantastic; it’s going to take off,’” Alex says.

Erich has a background in Materials Science, and this project is his brainchild. Together he and the team had a research grant and five years to come up with a new combination of materials (an alloy) which could store renewable energy in a compact and safe way. Alex watched from the sidelines as the inventors behind MGA Thermal did exactly this in the lab.

The idea of storing energy as heat is not new, but the metal blend they’ve invented is. It’s 1/10 the cost of materials of batteries. It also operates differently from batteries, as batteries typically store energy for only the short term.

Alex’s background means he knows about all the challenges that come with renewable energy.

“The energy network is completely changing the way we generate and use electricity,” Alex says. “It’s transitioning from fossil fuels. What we have now are intermittent renewable resources like wind and solar, but the sun’s not always shining, and the wind’s not always blowing. We need to be able to store that energy to dispatch it whenever you want. That’s going to be a massive problem worth solving as we switch to more and more renewables.”

Alex finished his PhD and was stoked to join the MGA Thermal team, working to get them exposure and financial backing.

“I was watching these guys make amazing new materials, but none of us experience in commercialisation. They were talking to industry but talking as academics at a university. There wasn’t much traction for a while,” Alex says. “This is where the I2N (Integrated Innovation Network) comes into it.”

He went along to a couple of I2N workshops and the pace started to pick up. In 2017 he went to an introduction to CSIRO’s On Prime program. Late last year he went to a workshop on IP, patents and trade secrets.  In July he joined a talk on government grants for startups.

“They were instrumental in starting us on the commercialisation path,” Alex says of the workshops. “I2N was first port of call in learning how to market our technology.”

After learning about the On Prime program, he saw that MGA Thermal could benefit and wanted to sign them up.

“I went to the other guys and said ‘I want to sign you up’. Everyone was kinda nonplussed, it seemed like a diversion from the work in the lab. They eventually agreed, with me as the team leader.” Alex says. “It turned out to be absolutely fantastic. The first thing that happened was we got assigned mentors. One of our mentors was one of the partners for Main Sequence Ventures, a fund that invests in deep tech startups. Since then, one of their managing partners has been a mentor for our team.”

I2N helped MGA Thermal take an idea and launch it into a proper startup. Now they’re officially a company. Alex says he has really changed the way he and his team talk about what they do, trying to not to get caught up with the nuanced technical details (like any researcher loves to do). He’s refined his pitch and he doesn’t talk about alloys much when he’s not in the lab.

“We came up with an easy way to store latent heat. It’s a big brick of graphite,” he explains. “Graphite doesn’t melt until over 3,000 degrees, but there are metal grains inside it that melt at 660 degrees.”

He often uses a chocolate chip muffin in the microwave analogy when talking about their product.

The alloy they’ve invented is the hypothetical muffin. The brick of graphite is the bread of the muffin, and it stays solid while the chocolate chips (the metal) melt. It’s charged up with resistors (electric heaters), and any time there’s an overflow of energy, the graphite can be charged up.

These are just a few examples of how MGA Thermal is slowly manifesting from an idea to a financially viable business, changing the future of renewable energy.

The local community is quickly catching up to what they’re up to. The city is cheering for them, and in June The Newcastle Herald wrote a front page story on their invention.

They’ve created something very powerful that could change the way the world uses renewable energy. MGA Thermal is just warming up.

Want an inside look at the startup? Catch up on MGA Thermal's Startup Story recap here.