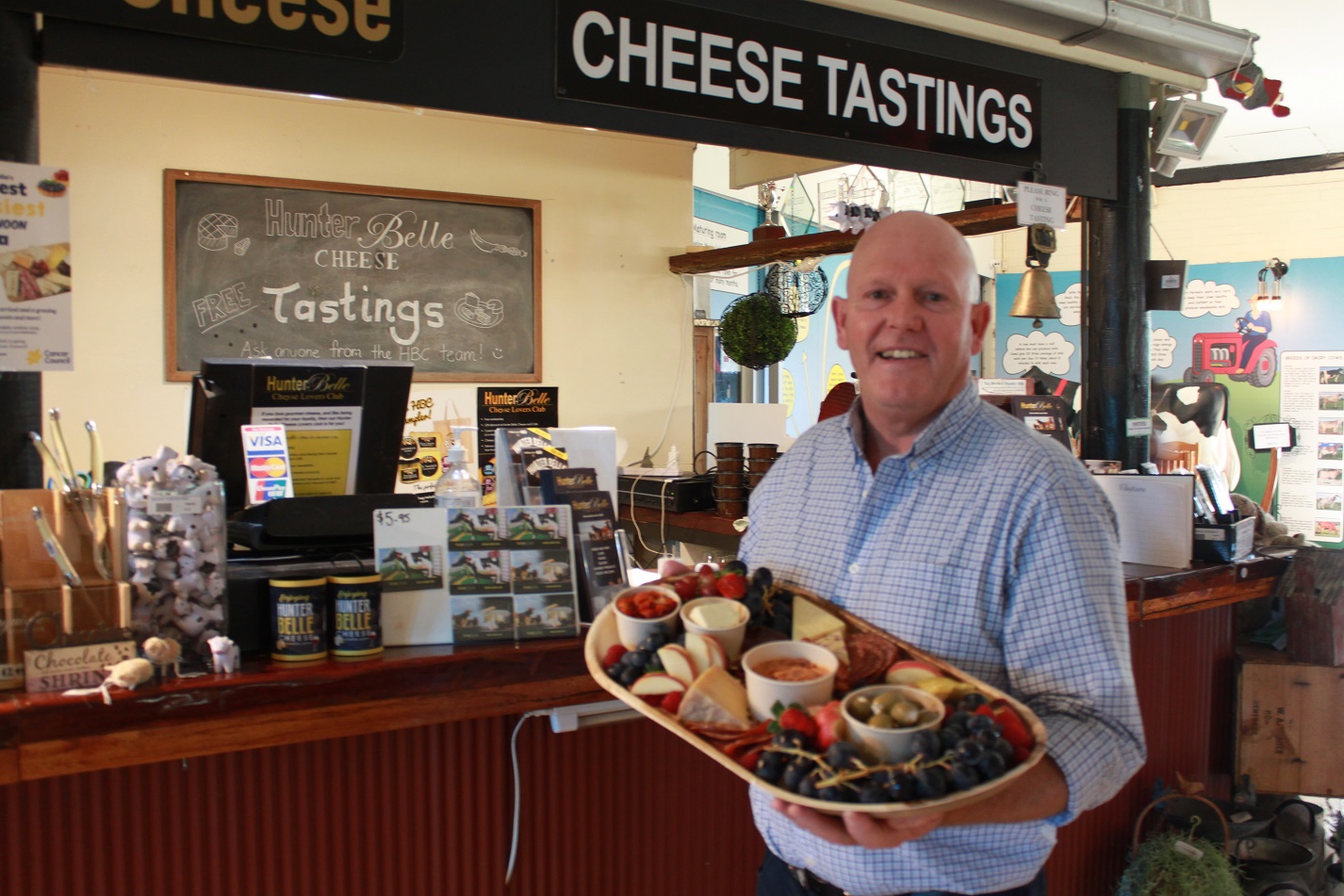 Now more than ever Newcastle is experiencing its place in the startup sun. It’s rapidly transitioning, but innovation isn’t limited to this city by the sea.

Across the Hunter region, entrepreneurs are working hard every day to innovate. Look no further than the small town of Muswellbrook. Located approximately 130kms north-west of Newcastle, its population ranges between 16,000 to 18,000 people. It was once dominated by dairy farms, but over the last 30 years, they’ve declined substantially.

Prior to running Hunter Belle Cheese, Geoff and his wife were dairy farmers.

“We finished dairy farming; the drought squeezed us out of the industry,” Geoff says. “We decided to buy Hunter Belle Cheese, which had already been established for about four years. It was a boutique cheese factory, a very small business. At first this was a little more than a hobby.”

Since they purchased the business in 2009 they’ve been building up the business. In 2010 they added their licensed café which now employs approximately 20 people. In 2017, they separated the cheese production side of the business from the retail and café arm.

“We enjoy a mix of business. We can have the café half full of high-vis clothes from the mines and the other half with jeans and moleskin-wearing horse people.” Geoff says.

They love getting local business. They see people from Merriwa up to Murrurundi. They’re on the New England Highway, so they get traffic from as far as Tamworth in the north-west, and international tourists visiting from Sydney.

“There’s possibly seven to eight cafes in Muswellbrook, but we set ourselves apart in quite a big way. Most of the cafes are located in shopping centers, but we’re much more of a destination. We like to think of ourselves as a gourmet café,” Geoff says.

Hunter Belle Cheese is stocked in stores all over the Hunter Valley. They have a range of 17 to 18 different cheeses, and their most popular is the triple cream brie. Another, called Blue Moon, is made with cheddar, so is not your typical blue cheese.

They’ve learnt so much since they got started, but in 2018, Geoff had an opportunity to attend the University of Newcastle’s Business Bootcamp workshops, facilitated by the Integrated Innovation Network, (I2N).

Geoff found out about the program through the Muswellbrook Chamber of Commerce. Advertised as a series of workshops which delivers practical tools and insights to help ambitious Upper Hunter businesses accelerate growth, he thought the course was worth attending for two reasons.

“Like most small business people, we get a very busy day in day out. You sometimes forget to stop and get outside the business and do a bit of work on it for the future. We don’t get opportunities like this every day,” he says.

He said when you’re living in regional NSW, you should take a chance like this.

The second reason he went along was that it was delivered by the University of Newcastle.

“They’ve got a bit of a footprint in Muswellbrook these days with I2N Hub Upper Hunter. I thought if they’re making the effort to bring this up to the regional areas, we should support it so it continues,” he says.

Geoff attended a series of three-hour workshops over three weeks. He was there with six other local businesses and he found the facilitator, Clare Quigley, very helpful.

He enjoyed being forced to take a step back and look at his business from the outside. He learnt a few things he’d never thought about before, particularly when it comes to catering.

“We do off-site catering, and we had a group discussion about what I was doing; everyone in the workshop shared their point of view on the service or the standard I’m offering. The thing I picked up was that whether it be canapés or grazing platters for parties or corporate functions, the people ordering from us are really trying to impress someone,” he says.

Obviously, you always want to be proud of your presentation, he said, but his “aha moment” came when he realised he needed to consider what different customers wanted, depending on the audience Hunter Belle Cheese was catering to.  It might be shareholders or the general public, but his customers want to put something on the table that makes their boss or attendees come and say “wow, fantastic job sourcing the catering.”

He added that one of the biggest problems with small business people is that they think that they don’t have time to step away from their business.

“I understand people might have that attitude and sometimes if they go out of their business they have to pay someone else to do what they had been doing, but from my point of view the value of taking those few hours going away and looking at a different perspective, you can learn so much more about your business, that’s the big thing,” he says.

He said it’s also a great networking opportunity, a way to get to know other local small businesses and form stronger bonds. He’s been in the business for ten years, so he presumed everyone in Muswellbrook knew what they did, but that’s not always true.

“In some cases that turns into more business as well. I got some work from that networking situation; people said ‘Wow, we didn’t know you did that!’”, Geoff says. “You can’t just sit back and say everyone in town knows us.  People in different roles change, and I said, ‘You know what? I gotta get off my butt occasionally and do a bit of PR around the place.’”

It’s good to see people like Geoff taking the opportunity to invest in their business long-term.