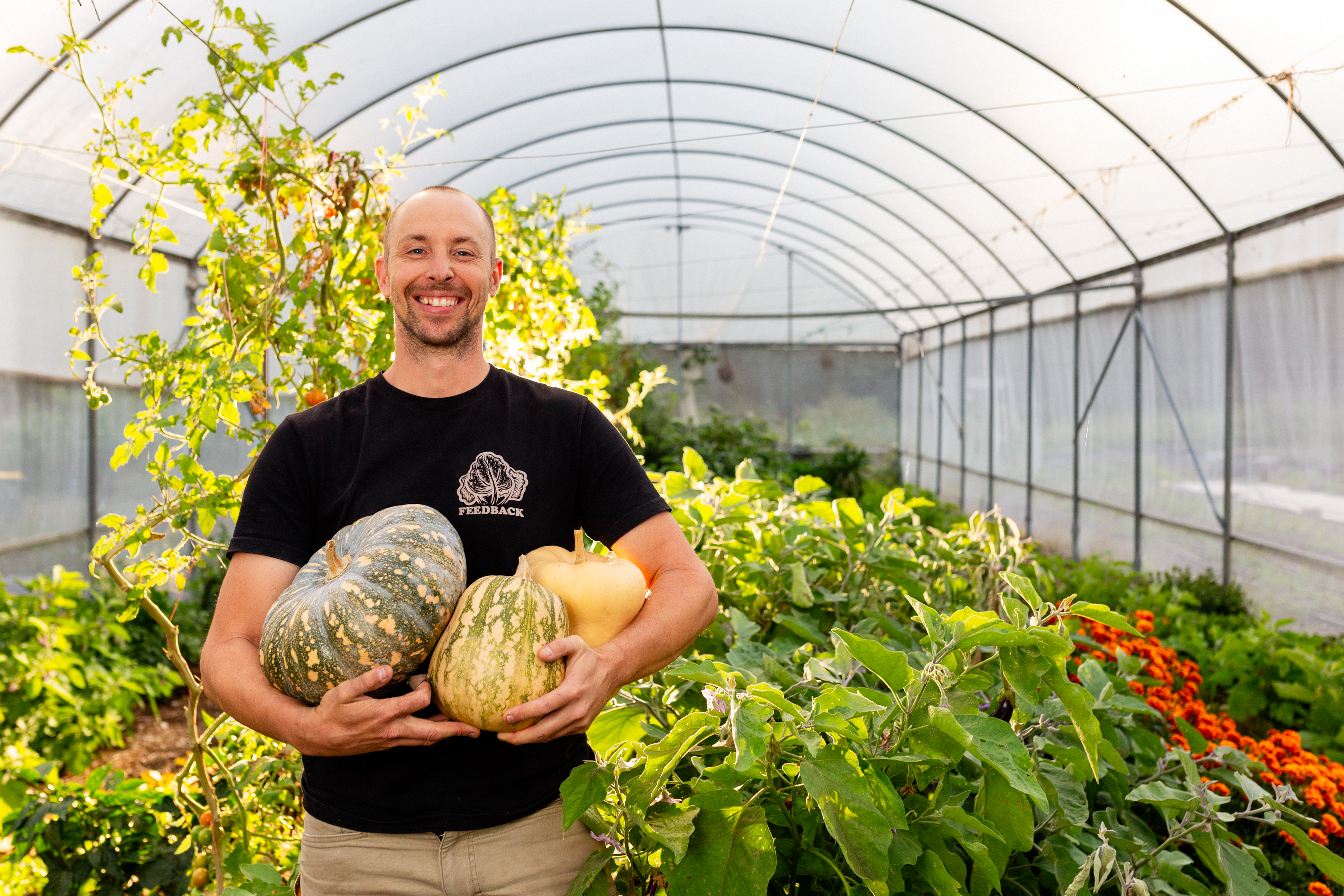 David Sivyer is the founder of Feedback Organic, a startup making waves in the circular economy industry.

What do you do with your leftovers? Do you whip them up into a mystery casserole? Scrape them into the bin? Pop them into some Tupperware, only to be forgotten about at the back of the fridge? However committed you and your family are to reducing your food waste, the truth is that household waste comprises just 1/3 of total food waste – and that 1/3 of all food produced in Australia is lost or wasted.

The facts of food waste and farming are not lost on Feedback Organic CEO David Sivyer, who grew up on a fifth-generation family farm in the Barrington Tops. Starting out his professional life in Sydney, working in hospitality and then business, David returned to the farm in his early thirties. He found the work challenging but enjoyable – though one of the things he missed most about his previous roles was the social life. “Coming from hospitality, I knew that food waste was a huge issue – and my sister was already in cahoots with food production hubs all over Newcastle. So I started going into town a couple of days a week to collect food waste from various friends and colleagues, which gave me an opportunity to connect with people and reduce waste, as well as to cultivate compost for the farm,” David remembers.

Thus began David’s love affair with compost and community, which took shape in various forms over the course of several years. He worked with the Purple Pear permaculture farm in Maitland to develop his compost knowledge as he continued to build his food-waste collection network, and experimented with lots of fun projects which utilised his new skills and connections. From compostable herb planters stitched together with second-hand hessian coffee sacks, to vertical gardens crafted from revived industrial crates and pallets, to working with schools to install planter boxes and gardens, David made a name for himself across the city as the go-to guy for composting and food waste reduction. “I was always trying to find some way to make a living out of it,” laughs David. He eventually moved into Newcastle, and started to develop the first of several urban farms with support from the Hunter Research Foundation. “It just made sense – we were trying to compost food waste from the city, so why not have a food-waste-into-food type of system on an urban farm?”

These days, David is able to focus his energy and effort on the Feedback Organic’s sole urban farm in Cardiff Heights. “It’s good having it all consolidated into one place because you can imagine how much work it was having to spread all our resources out across so many sites,” says David. While the number of farms David looks after has shrunk, his crew of talented helpers has blossomed – they’re now a team of eight employees whose skills range from permaculture to project management.

Today’s Feedback Organic business model is still centred around food waste collection – businesses, households, and schools can pay a subscription to the ‘Foodcycle’ wastebin collection service – but it has also expanded to ‘1-Hour Farmer’ weekend workshop offerings, as well as the ‘Feedbox’ organic fruit and veg box delivery service. The Feedbox produce is grown with the very compost generated by the city: by 2020, the team had diverted more than 1 million litres of food waste from landfill. In 2021, they are looking to expand into Sydney, with grants and support from the NSW Environmental Protection Agency (EPA), and Mosman City Council, who first connected with David when he was invited to give a sustainability presentation at Sydney’s VIVID festival in 2018.

In 2019, David took it upon himself to conduct a Graduate Certificate in Social Change and Development at the University of Newcastle, where he began to connect with other like-minded innovators, including Richard Berry, the I2N Program Coordinator, who encouraged David to apply for the Validator program. “Five of us took part in the program and it’s really brought us together as a team – but the biggest takeaway is how it’s brought structure into the way we operate,” says David. He’s also appreciative of the connections he’s made throughout the program, not just with local businesses, but with others working in the food waste and urban agriculture space across the country. “Our industry is pretty new, so any opportunity to access those networks is very exciting.”

Since taking part in the Validator program, David won the University of Newcastle’s award for Student Entrepreneur of the Year in 2020, and he’s been able to ensure a more predictable revenue from his projects, which has allowed him to expand his team and offer them some security. “When we were making most of our income through the farmers markets – through selling planters or veg or vertical gardens – there was always so much fluctuation. Now we’ve been able to identify our customers and form a sustainable business model,” he says.

As much as he appreciates this stability, the flexibility of his small business is – not surprisingly -one of the things David loves about it, and it’s clear he’s still got plenty of big ideas for the future of Feedback.  “We can pivot and head in different directions – I think I’ll always work in the environment space, but our next focus is going to be on behavioural change around food waste. That’s a big priority for the EPA right now, so we’re hoping to work with them, Hunter Water, and local councils to develop programs there.”