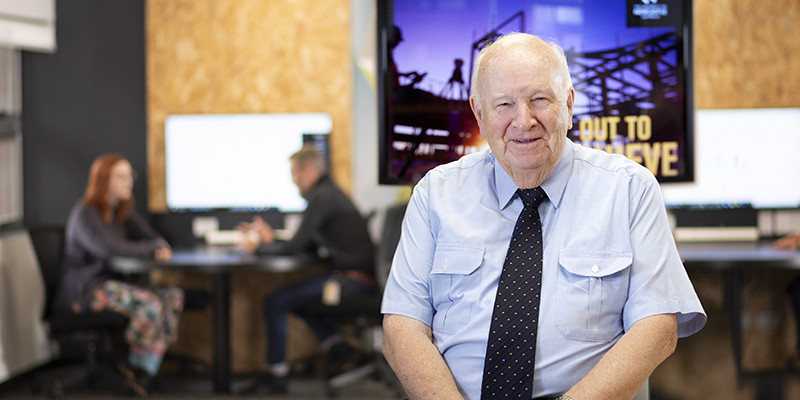 Emeritus Professor Alan Roberts AM has dedicated his career to providing students with life ready skills to make their mark in industry and society. A world-leading researcher and consultant in the field of bulk solids, Alan pioneered the university’s first ‘Women in Engineering’ program and has contributed significantly to the university’s active engagement with industry.

Alan took up the position as Professor of Industrial Engineering at the University of Newcastle in 1974 and was elected Dean of the Engineering Faculty and appointed Head of the Department of Mechanical Engineering later that year. He served as Dean for 20 years, also holding the position of Director of the School of Engineering and Architecture for the latter period of this time.

“When I came to Newcastle, there were two initial things that I tried to do; one was to establish the ‘Women in Engineering’ program. We hired an engineering graduate to act as director of the program with the objective of engaging female students and promoting engineering in a wider sense to the broader community.

“And the second thing was to establish an industry liaison committee,” said Alan. “I always felt that the tradition of engineering at Newcastle was spawned on a very strong interaction that occurred in the formative years with industry.”

One year after joining University of Newcastle, Alan established TUNRA Bulk Solids Handling Research Associates (TBS), the university’s not-for-profit research company, which continues to be a successful operation to this day. Over its 46 years of operation, TBS has completed some 5,000 projects for companies in Australia and in more than 40 countries worldwide.

“We're not-for-profit, so the income is used to support postgraduate research students and final year undergraduate students of the engineering program, as well as providing the opportunities for scholars that come from other parts of the university to undertake studies.”

The unique model of TUNRA has been extolled internationally for its amalgamation of university-lead research and real-world industry problems.

“From my own experience, I can say that the problems we see in industry are very often orders of magnitude more difficult than the level of research to solve them. So, we go and give short-term answers to try and solve the immediate problems in industry and from that we learn where the more fundamental catch-up research can take place.

That work then feeds back to the University, providing scholarships and support for postgraduate and final year undergraduate projects. In that way the link between the two, the consulting and the identifying of problems, is very valuable.

Colleagues in other parts of the world have always been envious of the TUNRA model because it's self-supporting and it’s tackling real-world problems,” said Alan.

Following his retirement in 1993, Alan has continued this work. “Luckily for me, I can still be involved through my role as a mentor. As I always say, I represent the past to the present. The people I mentor represent the present to the future. But of course, if there's no past, there's no future.

"I've always said that life is like a relay race. We each have a leg to run, and you take the baton from the predecessor, and you carry it forward. And that's the fundamental philosophy that's kept me going all these years.

"The piece of advice I would like to hand over is to make sure that some of the traditions and the theories are not overlooked. There is a vast difference between information as knowing, and information as understanding. It's very easy to use Google, but you need a good filtering system to see what the signal is and what is background noise.”

For over 40 years, Alan has nurtured and developed the field of materials handling and the university is now recognised as one of the leading research groups worldwide in this field.

“This award has been a great pleasure, but it’s also been a tribute to all my colleagues and the people that I've had the great pleasure of working with over the years, and to the new group of younger people that I'm still privileged to work with. It's through their cumulative effort that has led me to where I am now.”