Study a minor in Ancient History at the University of Newcastle 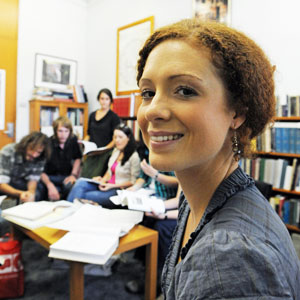 If you choose to study a minor in Ancient History, your degree will focus on a range of courses dealing with ancient societies, primarily Greek and Roman. You will learn about their culture, archaeology and history.

Develop highly desirable skills in analysis and expression, which are sought after in careers such as law, journalism, publishing, teaching and policy development.

Study ancient history and gain a deep appreciation of historical concepts and their relevance to modern society. You will learn from scholars such as Professor Marguerite Johnson who suggests:

''We have inherited the debt of past civilisations - the good and the bad. History teaches us to be better people because we can learn from our mistakes. It's all about gaining a sense of history and our place in it.'

By studying a degree in ancient history you can learn about past civilisations, and assess your own position in the continuity of historical events.

What jobs can you get with a minor in Ancient History?

Throughout your degree and studies in ancient history you will develop highly desirable skills in analysis and expression, which are sought after in a diverse range of careers such as:

Studying ancient history will equip you with skills applicable to many careers and industries, where skills in analysis, research, expression and communication are essential components of work.

What do you learn in an Ancient History minor?

When you study a minor in ancient history, you will learn how to use archaeological and written sources to conduct research into the following areas:

Which degrees include this minor?

The Bachelor of Arts and associated degree programs allow you to study a minor in Ancient History:

To learn more about our expertise in Ancient History, contact us.