If you would like to purchase any of Echology's CDs, please print the order form and return to us via fax or email. We will confirm dispatch of your order by email as soon as your payment is processed.

Echology demonstrates the University's commitment to excellence and innovation – from its members' deep love of music to their technical musicianship and artistic integrity, which is matched only by the Choir's willingness to move outside the traditional limits of choral performance.

Take a look at Echology's amazing work, which continues to receive accolades in Australia and overseas.

The University of Newcastle is delighted to present Jasmine and Wattle, which was recorded in Shanghai, China and includes music performed by Echology in the 2010 World Choir Games. It showcases the Choir's wide-ranging repertoire including several Chinese folk songs.

We hope listening to Jasmine and Wattle brings as much warmth and joy to you as our time in China brought to us.

"What a buzz to be surrounded by crowds of curious Chinese, many happily snapping photos of this strange group of Australians, while we sing a selection of Chinese folk songs and Waltzing Matilda. Our impromptu Chinese audience smile and applaud enthusiastically when we sing Moli Hua "Jasmine Flower" – a favourite Chinese folk song – in our best Mandarin accents! This experience is repeated many times – on the Great Wall, after a monster fireworks display in Shaoxing, and several times on the Bund in Shanghai. " - Dr Philip Matthis

This Land is a recording of the work of composer Iain Grandage. It was recorded in 2009 in the Harold Lobb Concert Hall at the University of Newcastle Conservatorium.

"The choir's introduction to the music of Iain Grandage was with a performance of Bush Songs in the mid 1990s. The singers had an instant affinity with the music. The work was also a cappella, which was in line with most of the choir's other repertoire.  Here was a composer writing with a freshness of approach, especially in regards to textures and timbres, with eminently singable vocal lines well constructed and with a wonderful sense of architecture in the music.

We were very fortunate to have Iain with us during our rehearsals and the first recording session.  It was an inspiring and happy process for all, whereby we gained first-hand insights into the compositional and performance styles of the music." - Dr Philip Matthias

contains a colourful and wide selection of music recorded in Christ Church Cathedral and the Conservatorium. It features the Echology choir, soloists and instrumentalists. Over half of the music is recorded for the first time.

"Very enthusiastic about your new CD. Congratulations. The breadth of music on your CD suggests it will be a very rich week for us." - Philip Billson, Producer, BBC Radio

"A fascinating and varied collection of pieces, with performances that do the conductor and performers proud." - Dr. Christopher Dearnley, CVO

"The concept of the CD is good and imaginative with a wide range of pieces and styles. I am delighted with the rendering of my pieces - you really have got the feeling absolutely right!" - Alan Wilson, composer

Far Horizons was mostly recorded when the choir was on tour in the United Kingdom and France in March 2002. Venues include Notre Dame, Paris, Liverpool Metropolitan Cathedral, the Temple Church and St Paul's Cathedral London. Many of the 30 tracks comprise works by Australian composers including Nigel Butterley, Keren Terpstra, Samuel Donovan and Philip Matthias.

"There is too much in these CDs to single out more than a few tracks for special mention. Among the highlights however would be Ian Kellam's splendid Howells-ian Evensong Canticles, and Paul Stanhope's haunting Lux Aeterna, both world premiere recordings. Excerpts from Philip Matthias' Jubilation Mass sound rather fine at the Temple Church too; This set is yet another triumph for Philip Matthias' work in a city fast establishing an international reputation for itself, and is a tribute to all involved. Warmly recommended."  - Peter Jewkes, The Sydney Organ Journal, Spring 2003

Journey of Celebration is a double disc of the Choir's UK tour. It includes the Guild of Church Musicians' Millennium Service from Canterbury Cathedral, 50 minutes of Australasian music and four BBC Daily Service broadcasts.

"A highlight of the conference in Canterbury was the young Australian University Choir from Newcastle. Their programme was absolutely riveting - how exciting it was to hear such well-tuned, blended chording!" - Laudate Magazine, U.K.

"We were treated to a first class recital in Canterbury Cathedral by the Chamber Choir of the University of Newcastle, Australia. People are still talking about it! It was superb." - John Ewington, OBE, General Secretary The Guild of Church Musicians

"When are you coming again to visit us?! You went down really well over here. You were just great. Will you please thank the choir from me for a splendid week of Daily Services." - Philip Billson, Producer, BBC Religion

"Both my wife and I were enormously taken by the quality of the choir's work. There is a certain quality that experienced young voices have which can be so exciting. It has something to do with that marvellous sense of both accuracy and excitement of all those who are still very much at the sharp end of their careers of musical exploration." - The Very Reverend Richard Fenwick, Dean of Monmouth

This CD is an example of the choir's lighter repertoire. A highlight is The Barber Shop Quartet with members drawn from the Choir. Popular favorites like Raindrops' Keep Fallin' On My Head and Sweet Sixteen, and a comical setting by Alfred Wheeler of Old Mother Hubbard.

"The singing is again extremely good. The choir, its director and its quartet have succeeded in putting yet another feather in Newcastle's artistic cap." - Peter Jewkes, The Sydney Organ Journal, Spring 2003 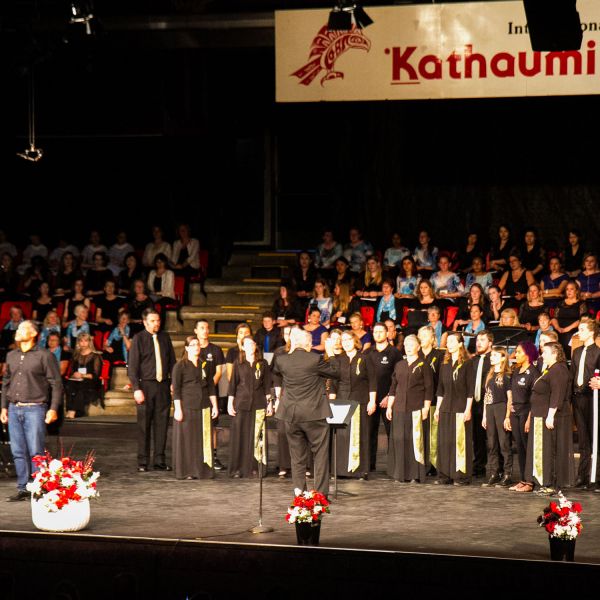 University of Newcastle’s Chamber Choir, Echology, on its 10th intern...

More than 350 people gathered at the University of Newcastle (UON) Great Ha...

The gift of education: UON to honour generous international donors at event

On October 22 the University of Newcastle (UON) will honour a generous grou...

What do a belly dance instructor, a maxillofacial surgeon and a young PR sp...

Continuing to make music together
Echology always has lots of people moving in and out of our ranks.  People move away or move onto other things.  Often times they come back.  We have a few people in our ranks at the moment that are returning after a stint doing other things. This also means that when a performance is on, […]

A busy July ahead. Read more